The Young and the Restless Spoilers: Will Eileen Davidson Return to Y&R – Why Is Ashley Leaving Town? 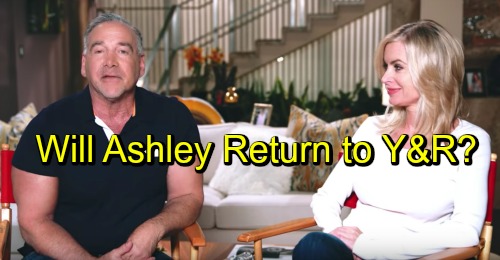 The Young and the Restless spoilers tease that Ashley’s (Eileen Davidson) announced departure for Paris will stun Genoa City. Fans have known about Davidson’s voluntary exit for awhile, though they’re still not exactly sure why the actor opted to leave the cast.

Davidson chose to leave Y&R earlier this year and then announced her decision to social media followers. Like many public figures that choice likely was an effort to maintain control over a real life narrative, rather than to allow speculative buzz to define her employment status change.

Davidson’s feelings about Y&R appear to be mixed. She has been seen in pleasant photos with cast members leading up to her final recording day. So, there appears to be no animosity in that regard.

However, executive producer and head writer Mal Young’s leadership seems to have irked Davidson. She recently appeared to counter his assertion that Ashley, as played by this particular actor, would been seen again.

If Davidson is and remains opposed to returning, even on a recurring basis, then Young could recast the part, as has been done by Y&R twice in the past under different management. Davidson has a far deeper history with Y&R than Young, as her tenure spans three-plus decades, whereas his only began at the mid-part of this decade.

A double-edged sword is carried by daytime veterans. They’ve created reputation patterns, which can cut various ways. If an actor has previously demonstrated a repeated history of questioning management, then a current beef would merely add to a high gripe pile. However, disagreeing with one leader could indicate a modest professional difference of opinion where neither party possessed venom.

Of course, a change in Young’s status could always occur. That factor should not be discounted regarding Davidson’s feelings about returning, but is also something that could be read between the lines.

Personality points should never be overlooked within Hollywoodland. It’s natural for longtime employees within any company to believe that they have some type of say in how their positions are handled. Considering the creative nature of a soap opera, it’s fair to believe that requests for Davidson’s input into her character’s direction allowed her to know, not just believe, that she had actual input.

Following that logic, it seems that Davidson may not have liked the direction Y&R wanted Ashley to go in, or had offered her a recurring contract that she rejected. She could also have wanted to leave the soapy grind. Of course, a combination of these factors may have combined to influence her choice as well. Only Davidson knows for sure.

In a very entertaining exit interview with Michael Fairman (see below) Eileen was careful to praise Mal Young’s work on her paternity story – this ‘no hard feelings’ public statement is significant and tells savvy fans that we might one day see Ashley return for a hot Y&R story! CDL is a leading source for everything linked to The Young and the Restless. Check back regularly for Y&R spoilers and news!