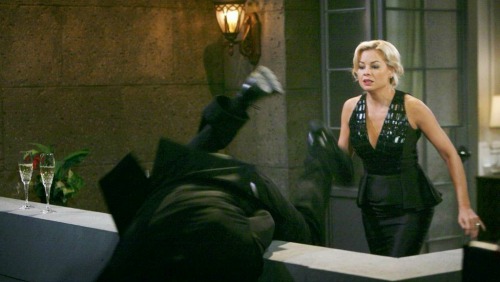 The Young and the Restless (Y&R) spoilers reveal that one CBS soap alum has some huge news. Jessica Collins left the role of Avery Clark back in 2015, but Y&R fans have missed her ever since. Collins is a fantastic actress who added a lot to Genoa City. As Phyllis’ (Gina Tognoni) sister, Avery had solid family ties on canvas. She also had loads of chemistry with her love interests.

That’s why it was a blow when Collins ultimately stepped away. In fact, Collins stepped away from the film and television industry entirely – and she had a good reason. Collins took some time to focus on a different role. She became a mom and devoted all her energy to her family for a while.

However, Collins is now ready to make a TV comeback. She kicked it off with a couple of guest spots on some popular shows. Collins recently appeared on Fox’s 9-1-1 as well as ABC’s Grey’s Anatomy. She seems thrilled to be in the acting world again, so she decided to thank her fans for all their support.

On Twitter, Collins offered some words of gratitude as well as a promise about what’s coming next. “So grateful to my fans for encouraging me to get back to work since becoming a mommy,” Collins said. “Some fun stuff coming up!” Naturally, it didn’t take long for Y&R-related replies to pop up. Many Young and the Restless viewers would love to see Avery in GC again.

“Nick needs a new love interest,” said one fan. “Come back to @YandR_CBS.” Another soap watcher tweeted, “Really miss you on Y&R and hope this means you might be coming back!!” Several viewers argued that Avery needs to land in Genoa City again and shake things up.

Since Nick (Joshua Morrow) and Phyllis will become friends with benefits soon, they could eventually inch toward a real reunion. Simple sex could easily turn into genuine love. It’d be great to see Avery come back in the picture and catch Nick’s eye again. They were involved once upon a time and we all know how he loves his exes!

Phyllis and Avery could battle it out for Nick’s heart. Sibling wars and love-interest sharing are soap staples, so this story practically writes itself. Even if they took Avery in another direction, plenty of people would be excited have her back. Now that Colllins is returning to acting, it’s at least a possibility.

So grateful to my fans for encouraging me to get back to work since becoming a mommy. Some fun stuff coming up! First, you can catch me tonight on #GreysAnatomy working with some pretty amazing women. @GreysABC #TrailerSelfie pic.twitter.com/mBJfQaWMIO