The Young and the Restless Spoilers: Y&R Fall Preview – Sneak Peek of Coming Shockers and Shakeups, Check Out the Hottest Storylines

BY Heather Hughes on August 31, 2018 | Comments: one comment
Related : Soap Opera, Spoiler, Television, The Young and the Restless 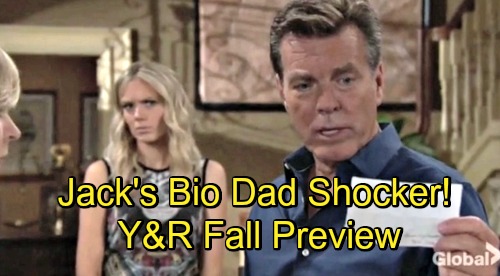 The Young and the Restless (Y&R) spoilers tease that the excitement will rev up this fall. The CBS soap has some big storylines planned, so Y&R fans should expect serious drama. Beloved characters will find themselves in tricky situations, so let’s look at a fall preview and see what’s in store.

For starters, we should talk about the Abbott clan. This family will be in crisis mode thanks to several bombshells. Jack’s (Peter Bergman) bio dad search will continue, but it may lead to revelations he doesn’t like.

As new evidence surfaces, Jack will be forced to face some unpleasant facts. It sounds like his real father could either be dead or someone he’d rather not be connected to. The latter would be more interesting, so that’s the option we’d bet on. The Young and the Restless spoilers say Jack may have to live a total nightmare. His quest for answers certainly won’t turn out like he was hoping.

Meanwhile, Ashley’s (Eileen Davidson) desire for power will grow. She’ll seek the Jabot throne, but that pesky blood-Abbott clause will get in her way. Can Ashley get around it and secure the CEO spot? She’ll try with a little help from Traci (Beth Maitland), but Billy (Jason Thompson) won’t give up without a fight. Kyle (Michael Mealor) is just as power hungry as Ashley, so she’ll have to watch out for him, too.

Speaking of Kyle, he’ll finally find a distraction from Summer (Hunter King). Someone new will enter his life and immediately catch his interest. There’s a good chance it’ll be Lola (Sasha Calle), Arturo (Jason Canela) and Rey’s (Jordi Vilasuso) sister. She’ll make waves and hopefully have a real spark with the young Abbott.

As for Billy, his downward spiral will leave Phyllis (Gina Tognoni) scrambling to save him. Billy is always a risktaker, but that’ll get him in even more trouble soon. Of course, Phyllis will do her best to keep Summer at bay. She won’t want her daughter screwing around with Billy, but that may be out of her control.

Summer will exploit Nick (Joshua Morrow) and Phyllis’ hookup secret again, which could mean she’ll blab to Billy. That secret will definitely end up in the wrong hands, so Nick’s concerns will intensify. He’ll fear that his marriage will be over before it ever begins. Sharon (Sharon Case) will worry about her own deception since she’s keeping Nick out of the loop on a J.T. (Thad Luckinbill) shocker.

Victoria (Amelia Heinle) will be on the verge of a breakdown in the coming weeks. It appears she’ll crack under the pressure, so Nate (Brooks Darnell) might be the one she spills to. Will the cover-up crew’s pact fall apart? Nikki (Melody Thomas Scott) will fret about Victoria along with Nick and Victor (Eric Braeden), who’ll continue to battle it out this autumn.

Over with Mariah (Camryn Grimes) and Tessa (Cait Fairbanks), they’ll work together to solve a financial problem. Tessa will need plenty of cash to take care of a threat, but she may not be revealing everything. Mariah could poke holes in Tessa’s sketchy story eventually, so their relationship will be tested once again.