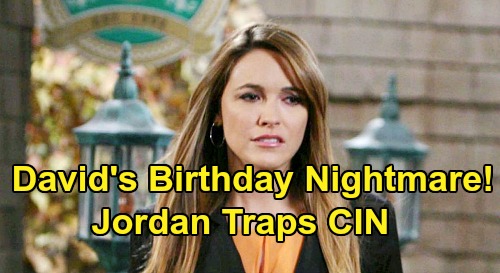 Ben would prefer a nonviolent strategy, but he knows Victor will do whatever he has to do to protect Ciara. During the week of October 14-18, Victor will indeed order a hit. He’ll tell his lackey to do the job they talked about and then he’ll await word that it’s finished.

Fortunately, Ben will receive word that someone else was actually behind the wheel in Ciara’s hit-and-run incident. It looks like Ben will save Jordan from a grim fate, but he may regret it! Days of Our Lives spoilers say Jordan will use this opportunity to her advantage. She’ll be pleased when she gets an apology from Ben. Jordan will feel like this is her chance to plot a sneak attack.

DOOL fans can expect David to have a birthday party during the week of October 21-25. Ben and Ciara will be invited, which should surprise them. Perhaps Jordan will do it under the guise of making amends. She may think Ben believe they can put the past behind them and bond as siblings again.

Alas, Jordan will be up to no good! Days of Our Lives spoilers say Jordan has some sort of trap in store. She’ll scheme against Ben and Ciara, so this birthday bash will turn into the worst kind of blowup. Rafe Hernandez (Galen Gering) should be there to witness the horror show. Jordan will undoubtedly paint herself and her son as victims while Ben, Ciara or both are left looking like awful people.

It’s all part of Jordan’s plot to make sure she’s never separated from David. Days viewers can understand why Jordan would be protective, but she’s going overboard here. Jordan’s out of control, so this chaotic birthday party is just the beginning. She’ll surely have something much worse in mind down the road.

It sounds like some shockers are brewing, so don’t miss all the action. We’ll give you updates as other Days news comes in. Stay tuned to DOOL and don’t forget to check CDL often for the latest Days of Our Lives spoilers, updates and news.