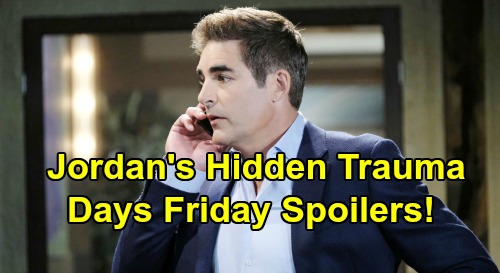 Days of Our Lives (DOOL) spoilers for Friday, February 22, tease that Ben Weston (Robert Scott Wilson) will make a difficult admission. He’ll reflect on his recent showdown with Jordan Ridgeway (Chrishell Hartley) and how he nearly killed her. In that moment, Ben’s dark side took over. It started out as an attempt to protect Ciara Brady (Victoria Konefal), but he quickly went too far.

If Rafe Hernandez (Galen Gering) hadn’t showed up to stop Ben, he probably would’ve murdered his own sister. Ben became enraged at the thought of someone targeting the only thing that matters to him. Ciara has been Ben’s rock ever since they bonded at the cabin. He couldn’t handle the idea of Jordan taking her out, and he seemingly wanted revenge for it.

Thankfully, Jordan is still alive and well. The same goes for Ciara and Ben, so Ciara will think they can all move forward. She’ll argue that Jordan will get the help she needs just like Ben did. However, Ben will worry that he can’t truly control the darkness within. He’ll wonder if he’s still capable of murder, so doubts will bubble up about his romance.

Other Days of Our Lives spoilers say Rafe will ask Jordan a few questions. He’ll try to figure out how the woman he once loved turned into someone so off her rocker. Jordan will slowly let her guard down with Rafe. She’ll talk about all the awful trauma she’s endured in her lifetime. Some of it was brought on by Clyde Weston (James Read) and other problems happened thanks to terrible luck.

Rafe will show sympathy for Jordan and insist there’s hope for her. He’ll want to provide support and make Jordan see that a brighter future is possible. Before Jordan’s carted off to Bayview, she’ll offer one last warning to Ben. Days of Our Lives spoilers say Jordan will reiterate that Ben poses a threat to those around him – especially Ciara. She’ll think Ben should steer clear of Ciara before he makes a tragic mistake.

While Ben mulls over that ominous statement, something shocking will be revealed. The person who started the original cabin fire is still a mystery to the Salem PD. Rafe and Hope Hernandez (Kristian Alfonso) will remain stumped, but DOOL viewers will finally be brought in the loop.