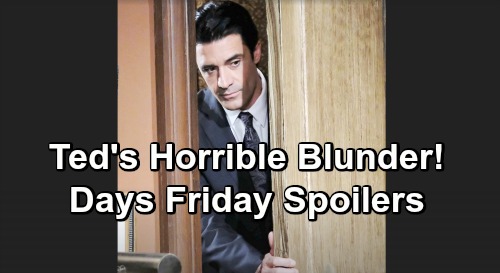 Days of Our Lives (DOOL) spoilers for Friday, June 14, tease that Xander Cook (Paul Telfer) will find himself on the hot seat. He’ll face doubts and questions about the diary he just presented to Maggie Kiriakis (Suzanne Rogers). DOOL fans can expect Xander to get grilled, but he’ll have an answer for everything. He’ll hope to convince Maggie, Brady Black (Eric Martsolf) and especially Dr. Sarah Horton (Linsey Godfrey) that he’s just trying to do a good deed.

Of course, that’s not exactly true since Xander just wants to impress Sarah. She’ll remain wary of Xander’s motives, but she’ll at least be happy that Will Horton (Chandler Massey) has a chance at survival. Once Sarah confirms that Dr. Wilhelm Rolf’s (William Utay) diary is the real deal, she’ll examine the contents with Dr. Rex Brady (Kyle Lowder) and try to turn the formula into an antidote.

Meanwhile, Hope Brady (Kristian Alfonso) will get into a heated argument with Kate Roberts (Lauren Koslow). Days of Our Lives spoilers say Ted Laurent (Gilles Marini) will be the topic driving this conflict. Kate will have some harsh words about Ted and his shady history. She’ll agree with Will’s recent outburst and contend that Hope’s interest in Ted is beyond wrong.

However, Hope may suggest that it’s her life and she can live it any way she wants. She might have some lingering reservations, but dating Ted is her choice. As for Ted, he’ll plan to push Hope past the point of no return. He’ll intend to do something so amazing that Hope will fall into his arms and realize he’s the man of her dreams.

Ted is far from a good person, but he’ll masquerade as one when he takes Holly Jonas’ (Harlow and Scarlett Mallory) original autopsy results to “Nicole Walker” (Arianne Zucker). He may lie that he got suspicious of Xander and decide to dig around. Regardless, it seems Ted will offer proof that Holly’s alive and expect “Nicole” to be overjoyed.

Naturally, that won’t be the case since Kristen DiMera (Stacy Haiduk) is impersonating the grieving mom. Days of Our Lives spoilers say Ted’s betrayal will leave Kristen with no choice. As CDL previously reported, Kristen will realize she’s going to have to do something about this traitor. Ted doesn’t know Kristen’s involved here, so he’ll end up in a mess he never anticipated.

Other Days spoilers state that Haley Chen (Thia Megia) and JJ Deveraux (Casey Moss) will share a close moment. They’ll get emotional as they bid each other farewell in Friday’s episode. Haley’s deportation will be imminent, but a last-minute solution just might appear out of the blue.

It looks like some gripping scenes are coming up. We’ll give you updates as other Days news emerges. Stay tuned to DOOL and don’t forget to check CDL often for the latest Days of Our Lives spoilers, updates and news.