Days of Our Lives Spoilers: Julie Seems Different After Heart Transplant – But Did She Get Stefan’s Heart or Dr. Shah’s? 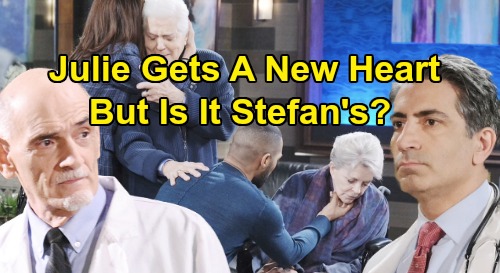 Days of Our Lives (DOOL) spoilers tease that Julie Williams (Susan Seaforth Hayes) will get her miracle when Gabi DiMera (Camila Banus) finally decides to let her have Stefan DiMera’s (Brandon Barash) heart. It certainly won’t be easy getting Gabi to agree to the donation, as she understandably won’t want to take Stefan off of life support, but ultimately she’ll decide that it’s the right thing to do, and Julie’s life will be saved.

Of course, at a later point, Julie will have to be told that she’s received Stefan’s heart, and that will surely come as a surprise, especially since she’ll learn that it was Gabi who agreed to the transplant. Since Julie and Gabi don’t get along, that should be an interesting revelation for sure. Who knows – the two ladies could even make up and bond over the experience.

But something tells us that there could be more to the story here. After all, Stefan is a DiMera, and the likelihood of a DiMera actually dying and staying dead is slim. The family has unbridled access to Dr. Wilhelm Rolf (William Utay), who has brought many people back from the dead over the years. Still, Days of Our Lives spoilers say that Gabi will try to get Rolf to save Stefan, but that she’ll ultimately decide to give his heart to Julie, indicating that Rolf will be unable to save him.

But could there be a twist coming? We can’t help but wonder whether some sort of finagling will go on behind the scenes, perhaps even outside of Gabi’s awareness, that results in Stefan actually living while a switch occurs and Julie gets someone else’s heart. After all, there was another death in Salem very recently, and that was Dr. Henry Shah (Piter Marick). What if Julie actually ends up getting Henry’s heart, but everyone thinks she got Stefan’s?

Now, that sounds just like something that Rolf would be involved in! We’ll see exactly what happens, but if Stefan is ever to return to DOOL down the line, then there’d have to be some good explanation. Sure, Henry died shortly before Stefan did, so the timing is just a bit off, but who’s to say that Rolf didn’t bring Henry back to life with his serum and harvest his heart? It may sound wild, but wilder things have certainly happened on DOOL.

We’ll see what ultimately happens, but we think there’s a good possibility that something very interesting will occur with this whole heart transplant situation – something that would leave the door open for a Stefan return someday. Do you think that Stefan will actually survive somehow? Stay tuned to DOOL and don’t forget to check CDL often for the latest Days of Our Lives spoilers, updates, and news.