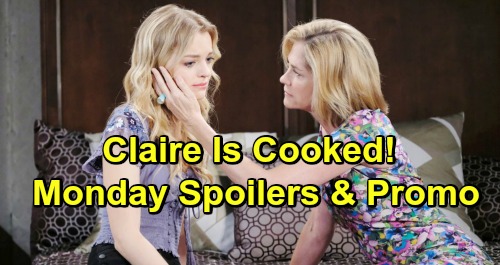 Days of Our Lives (DOOL) spoilers for Monday, April 1, tease that Claire Brady (Olivia Rose Keegan) will be in crisis mode. She managed to record Tripp Dalton (Lucas Adams) promising his marriage to Haley Chen (Thia Megia) would only be a sham. Now Claire’s counting on Eve to do her part and blow things up.

However, Days spoilers state that there’ll be a change of plans. Eve Donovan (Kassie DePaiva) was hoping to call a press conference, but Jack Deveraux (Matthew Ashford) just shut down that idea. It looks like Jack will think bigger and push for a huge rally instead. Jack may think they should turn this revelation into a major event, so Eve will certainly be on board.

Naturally, Claire won’t love the idea of playing a waiting game. She’ll complain about the delay since it’ll take a while to put this rally together. Claire may even worry that it’ll make more trouble for Tripp. Since he’ll have time to go through an immigration interview, Tripp will be in this deep and could face legal consequences.

However, Eve may suggest that Haley’s the one who’ll take the real hit. She’ll reassure Claire, but another problem will be picking up steam across town. DOOL fans know JJ Deveraux (Casey Moss) has developed some strong suspicions. Now that he’s heard Jordan Ridgeway (Chrishell Hartley) didn’t set the initial cabin fire, JJ has to wonder about that lighter from Claire’s jewelry box.

Days of Our Lives spoilers say JJ will mull over the possible link here. He’ll eventually decide to get some solid answers, so he’ll plan to retrieve that lighter and hand it over to the Salem PD for analysis. At Bayview, DOOL viewers can expect a tearful story from Jordan. She just told Rafe Hernandez (Galen Gering) she has a baby boy, so she’ll ask her ex to do something for her on Monday.

Jordan will want to make sure her son is taken care of, so she’ll send Rafe out to get David in California. Days of Our Lives spoilers say Rafe will grant Jordan’s request, which will really set Hope Hernandez (Kristian Alfonso) off. “Rope’s” relationship is clearly crumbling, so Hope and Rafe need to figure out if they can work through their issues or if they should just move on.

It sounds like some great scenes are coming up on the NBC soap. We’ll give you updates as other Days news emerges. Stay tuned to DOOL and don’t forget to check CDL often for the latest Days of Our Lives spoilers, updates and news.