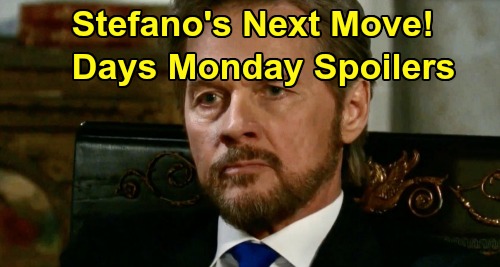 Days of Our Lives (DOOL) spoilers for Monday, December 2, tease that some hot drama’s coming up. We should point out that DOOL will be preempted on Thursday, November 28, as well as Friday, November 29. Fortunately, Days will pick up right where they left off once Monday rolls around. With that in mind, let’s dive in and see what’s ahead in Salem.

For starters, Marlena Evans (Deidre Hall) and John Black (Drake Hogestyn) will continue to mull over Marlena’s special delivery. John was certain Sami Brady (Alison Sweeney) must’ve been behind the flower arrangement, which included a card signed “S.” However, a quick call to Sami shut down that idea.

As Marlena and John keep pondering this mystery, they’ll settle on Stefano DiMera (last played by the late Joseph Mascolo) as their top suspect. John and Marlena will agree that Stefano might’ve sent this gift, so that should be a little unsettling. Stefano’s always someone who’s got a few tricks up his sleeve, which means Marlena and John need to be prepared!

Of course, they could never be ready for the truth. As CDL predicted, “Princess Gina Von Amberg” aka Hope Brady (Kristian Alfonso) showed off a new portrait of Steve Johnson (Stephen Nichols) in Stefano’s familiar pose. Days of Our Lives spoilers say Steve is the new Stefano – or at least he’s got Stefano’s memories implanted. He sent Marlena that flower arrangement and will inevitably have more surprises in store. “Steve-ano” will be busy plotting how to make his sneaky public debut.

In the meantime, Kayla Brady (Mary Beth Evans) and Justin Kiriakis (Wally Kurth) will discuss taking a major step forward together. Justin just suggested that Kayla should move in with him, so Kayla will have to give him her response. It might be happening a little too fast, but everything about this relationship has happened a little too fast! Maybe that means they’ll take this step too fast, too.

At some point early next week, Evan Frears (Brock Kelly) will make a move of his own. He’ll plant a kiss on Sonny Kiriakis (Freddie Smith), so things will speed up for these two as well. At Statesville, Ben Weston (Robert Scott Wilson) will deal with more of his dad’s mayhem. He’ll be forced to intervene when Clyde Weston (James Read) launches a vicious attack on Will Horton (Chandler Massey).