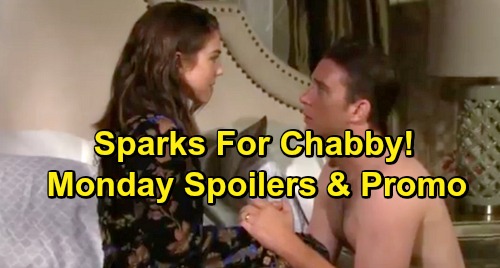 Days of Our Lives (DOOL) spoilers for Monday, February 18, tease that Chad DiMera (Billy Flynn) will continue reconnecting with Abigail Deveraux (Kate Mansi). They just had a deep conversation about their love for each other and how they’re tired of being apart. Since Abigail has finally forgiven Chad, they might as well take full advantage of this wonderful reunion.

DOOL fans can expect Chad and Abigail to make love as they seal their future together. They’ll savor every moment as they let the mistakes of the past go. Abigail and Chad always find a way to overcome the obstacles. They’ll be grateful that they’re beyond all the drama and can begin a new chapter.

It turns out that new chapter will involve a fresh start in another city. At some point, Chad will suggest moving to Paris. He’ll have a job offer waiting for him there, so he’ll think they should pack up the kids and secure their family’s new beginning. Days spoilers say “Chabby” will remarry later this week before they kick off this big adventure.

In the meantime, Ciara Brady (Victoria Konefal) will leap out of bed and try to fight off Jordan Ridgeway (Chrishell Hartley). Jordan just smacked Ben Weston (Robert Scott Wilson) in the head and intends to finish him off with a syringe full of drugs. Of course, Ciara won’t stand for that. She’ll try to wrestle the syringe away from Jordan, but she’ll end up in danger herself.

Thankfully, Ben will awaken and gain the upper hand. Ciara and Ben will save each other’s lives, so their love will grow stronger by the second. Over with Rafe Hernandez (Galen Gering), Days of Our Lives spoilers say he’ll bark a warning at Ted Laurent (Gilles Marini). He’ll remind Ted that Hope Hernandez (Kristian Alfonso) is a married woman.

Rafe will insist that won’t let anyone get in the way of their relationship, especially not someone as smarmy as Ted. Days viewers know Ted has a softer side, but Rafe certainly won’t see it. He’ll just think Ted is a manipulative ladies’ man, so he’ll urge him to keep his distance from Hope.

Other Days of Our Lives spoilers say Sarah Horton (Linsey Godfrey) will battle terrible suspicions. She’ll discover something that makes her think Rex Brady (Kyle Lowder) is cheating again, so she’ll definitely have concerns. Sarah won’t want to believe it’s true, but she’ll have to wonder based on Rex’s awful track record.