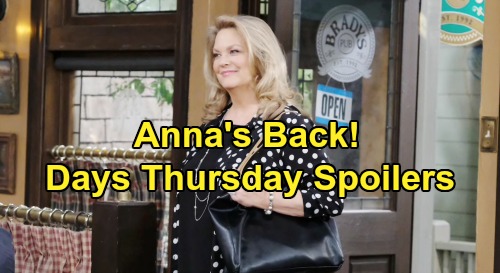 Days of Our Lives (DOOL) spoilers for Thursday, August 8, tease that a familiar face will return to Salem. Anna DiMera (Leann Hunley) will show up in town again, so she’s undoubtedly heard the news about Tony DiMera’s (Thaao Penghlis) survival. She’s going to have loads of questions, especially since Tony married “Nicole Walker” (Arianne Zucker) and is trying to help her gain control at DiMera Enterprises.

Anna has spent most of her time mourning Tony and toting his urn around since his death. She’s sure to be outraged by Tony’s behavior. Tony was the love of Anna’s life and she was his, too. Days of Our Lives spoilers say Anna will be ready to get some answers, but Tony should do his best to avoid her at first. He won’t want to face his soul mate since he’s keeping so many huge secrets.

Over with Stefan DiMera (Brandon Barash), he’ll have someone surprising in his corner. Gabi DiMera (Camila Banus) assured Stefan she was done with him, but she just won’t be able to stay away. When Gabi gets updates on the murder accusations Stefan’s facing, she’ll rush to his defense. Gabi won’t believe Stefan could’ve murdered Ted Laurent (Gilles Marini) in cold blood, so she’ll step up for him.

Other Days of Our Lives spoilers say Hope Brady (Kristian Alfonso) will discover something shocking. Perhaps she’ll make her way back to the park and find the necklace Kristen DiMera (Stacy Haiduk) disposed of. Hope may realize Ted’s killer didn’t want to be connected to it and ponder the identity of the woman who dashed off. Her mind might immediately go to “Nicole,” but she’ll need more evidence.

Of course, DOOL fans know Kristen DiMera (Stacy Haiduk) wasn’t wearing her mask at the time, but it doesn’t matter since Hope didn’t see her face anyway. Hope will just know something isn’t adding up here, so she’ll recruit John Black (Drake Hogestyn) to help her solve the puzzle next week.

Meanwhile, Days spoilers state Kristen will face a difficult decision. After making love to Brady Black (Eric Martsolf), Kristen will be torn between continuing the Nicole charade and revealing her true self. She’ll start to believe Brady might actually love her for her, but she’ll ultimately decide it’s too risky to come clean right now.

It sounds like an exciting episode’s coming up. We’ll give you updates as other Days news emerges. Stay tuned to DOOL and don’t forget to check CDL often for the latest Days of Our Lives spoilers, updates and news.