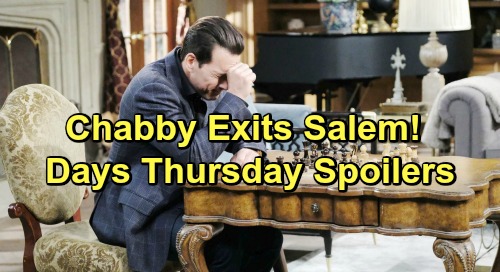 Days of Our Lives (DOOL) spoilers for Thursday, February 21, tease that a special episode is on the way. Chad DiMera (Billy Flynn) and Abigail Deveraux (Kate Mansi) are about to tie the knot again, so their family and friends will look on with delight. Julie Williams (Susan Seaforth Hayes) agreed to perform the ceremony, which will make it even more wonderful for this newly reunited couple.

DOOL fans can affect some emotional vows along with a heartfelt announcement from Jack Deveraux (Matthew Ashford). He’s struggled to connect with Abigail since his return, but he’s her dad and she loves him. That love is all that matters, so Abigail will appreciate whatever sweet words Jack can come up with. She’ll undoubtedly embrace her father and thank him for his touching speech.

After Abigail and Chad make it official, they’ll take a trip over to the DiMera mansion. In the meantime, Days spoilers state that Stefan DiMera (Tyler Christopher) will drop a bomb on Gabi Hernandez (Camila Banus). He’ll insist that she’s fired and reveal that he plans to sell off Gabi Chic, so you can bet Gabi will unleash her wrath.

While Stefan and Gabi lash out at each other, Chad and Abigail will arrive. Days of Our Lives spoilers say Abigail will seek closure, so Stefan will give her that. He’ll offer a genuine apology for his part in Abigail’s suffering and hope she can accept it. Regardless, Abigail will suggest that she’s moving on with her life. She’ll just be focused on this next chapter with Chad and their beautiful family.

After Abigail wraps things up with Stefan, she’ll return to the Horton house with Chad. They’ll want to pick up the kids and bid Jennifer Horton (Melissa Reeves) farewell. It won’t be an easy goodbye, but Jenn will wish them the best. As Jennifer watches Chad and Abigail leave for Paris, it’ll definitely bring some bittersweet moments.

Stefan will definitely struggle with Abigail’s departure. He’ll conclude that “Gabby” is gone forever and have a major meltdown. As insane as this obsession was, Stefan truly loved “Gabby” and once thought they could have a life together. The realization that they never will is going to hit him hard.

Elsewhere, Eve Donovan (Kassie DePaiva) will eavesdrop on Haley Chen’s (Thia Megia) conversation with Melinda Trask (Laura Kai Chen). Days of Our Lives spoilers say Eve will overhear some details she can use. She knows Haley’s undocumented status would work to Jack’s advantage in the mayoral race, so she’ll resolve to make the ultimate mess for Melinda.

It sounds like some fantastic scenes are coming up. We’ll give you updates as other Days news emerges. Stay tuned to DOOL and don’t forget to check CDL often for the latest Days of Our Lives spoilers, rumors, updates, and news.