Days of Our Lives Spoilers: Thursday, November 7 – Ben Worries He Has to Kill Jordan – Kristen’s Pregnancy Crisis, Fears for Baby 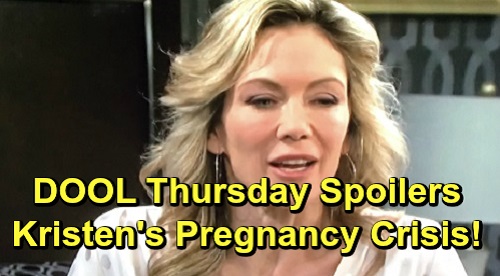 Days of Our Lives (DOOL) spoilers for Thursday, November 7, tease that Jack Deveraux (Matthew Ashford) will seek answers with JJ Deveraux’s (Casey Moss) help. Kayla Johnson (Mary Beth Evans) just came out with good news and bad news. The good news is Jennifer Horton (Melissa Reeves) survived her emergency surgery. The bad news is Jennifer lapsed into a coma, so Kayla won’t be able to predict when Jennifer might wake up.

Jack will feel helpless, so he’ll eventually search for the truth with JJ. They’ll try to get to the bottom of Jennifer’s fall, but it seems like Jack’s already on the right track. He was pumping Rafe Hernandez (Galen Gering) for info about the flash drive and knows “Hope Brady” aka Princess Gina (Kristian Alfonso) was nearby. Unfortunately, the clues just won’t come together for Jack – not the right ones anyway!

Days of Our Lives spoilers suggest Eve Deveraux (Kassie DePaiva) may land in hot water soon, so it seems Jack and JJ will bark up the wrong tree. In the meantime, Nicole Walker (Arianne Zucker) will battle guilt over her deception. She’s staying tight-lipped about Sarah Horton’s (Linsey Godfrey) pregnancy, but she’ll do some soul-searching on Thursday and wonder if it’s really the right call.

Nicole hates lying to Eric Brady (Greg Vaughan), especially about something as lifechanging as a child. Eric is great as a fill-in father to Holly Jonas (Harlow and Scarlett Mallory), so he’d be a devoted dad to Sarah’s kid, too. However, Nicole can’t help but worry she might lose Eric if she comes clean. She doesn’t want Eric to know she’s been keeping secrets, nor does she want to risk the baby pulling him toward Sarah.

Nicole will ultimately choose to keep quiet, but some other baby drama will take place across town. Days of Our Lives spoilers say Kristen DiMera (Stacy Haiduk) will have another pregnancy crisis. She’ll experience some scary pain and fear she might lose this long-awaited child.

Elsewhere, Xander Cook (Paul Telfer) and Brady Black (Eric Martsolf) will face off. They’ll push each other’s buttons as usual, so DOOL fans can expect a fierce fight. Over with Ben Weston (Robert Scott Wilson), he’ll fret about Jordan Ridgeway’s (Chrishell Hartley) threat. Ben will grow concerned that if he doesn’t do something fast, Ciara Brady (Victoria Konefal) could wind up dead.

Days spoilers say Ben will feel like he may have no choice but to kill Jordan. That’s obviously not what he wants to do, but Ciara’s safety is his priority. Ben recently had a nightmare about murdering Jordan and another deadly dream’s coming up. There’s a good chance Ben won’t actually do the deed, but he’ll indeed wake up next to a dead body by week’s end.

It sounds like some exciting scenes are on the way. We’ll give you updates as other Days details emerge. Stick with DOOL and don’t forget to check CDL often for the latest Days of Our Lives spoilers, updates and news.