Days of Our Lives Spoilers: Week of March 18-22 – Life-and-Death Battle, Incriminating Evidence and a Sudden Marriage 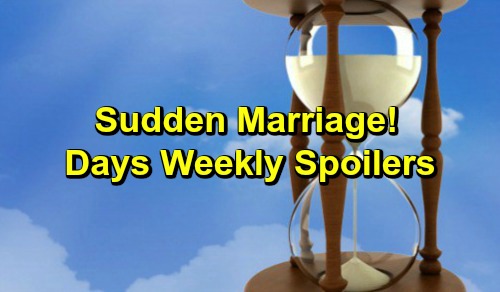 Days of Our Lives (DOOL) spoilers for the week of March 18-22 tease that several storylines will heat up on the NBC soap. First, Dr. Marlena Evans (Deidre Hall) will linger between life and death. We’ll see a DOOL episode that’s all about the battle for her soul.

Days of Our Lives spoilers say that’ll be great news for John Black (Drake Hogestyn), but Diana Cooper (Judith Chapman) certainly won’t be pleased. She’ll start to sweat when she realizes she may have left evidence in Marlena’s office. John will grill Diana about Marlena’s poisoning later, so she’ll worry that the jig is almost up.

Meanwhile, Stefan DiMera (Tyler Christopher) will strengthen his bond with Chloe Lane (Nadia Bjorlin). They’ll grow even closer, but a new Stefan will rip into Leo Starke (Greg Rikaart) by the end of the week. Days spoilers state that Brandon Barash will soon make his debut as a recast, so stay tuned for Stefan’s explosive outburst.

Over with Brady Black (Eric Martsolf), he’ll try to turn Rex Brady (Kyle Lowder) against their brother. Brady is clearly fed up with Eric Brady (Greg Vaughan) right now, so he’ll hope to get Rex on his side. Next, Sarah Horton (Linsey Godfrey) will confide in her mom. She’ll tell Maggie Kiriakis (Suzanne Rogers) about the kiss she planted on Eric and try to get some advice.

Maggie may push Sarah to follow her heart and be fair to both men. However, Sarah’s opinion may not matter much once Eric makes a promise to God. He’ll be willing to back off Sarah if Marlena survives. Since we know Marlena’s going to be just fine, Sarah may end up disappointed.

Other Days of Our Lives spoilers say an anniversary dinner is on the way. Rafe Hernandez (Galen Gering) will celebrate this special occasion with Hope Hernandez (Kristian Alfonso), so they’ll renew their commitment. Next, Haley Chen (Thia Megia) will find herself in a desperate situation. She’ll be deported unless something drastic works to her advantage.

Days spoilers state that JJ Deveraux (Casey Moss) will offer to tie the knot with Haley. She’ll turn him down, but Tripp Dalton (Lucas Adams) will give her a second offer of marriage. Since Tripp has no ties to mayoral candidate Jack Deveraux (Matthew Ashford), Haley will be more open to the idea.

Tripp will eventually have to drop the bomb on Claire Brady (Olivia Rose Keegan), so expect a major confrontation. It looks like some hot episodes are coming up in the week ahead. We’ll give you updates as other Days details emerge. Stick with DOOL and don’t forget to check CDL often for the latest Days of Our Lives spoilers, updates and news.