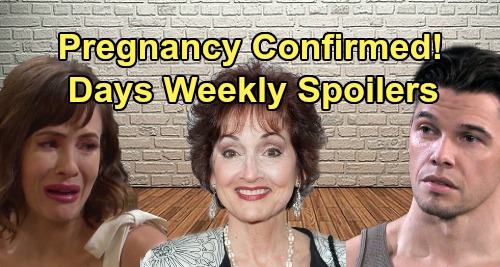 Days of Our Lives (DOOL) spoilers for the week of September 2-6 tease that things are about to heat up in Salem. First, a stunning secret will be uncovered. Vivian Alamain (Robin Strasser) is alive, so that bombshell should be waiting for Eric Brady (Greg Vaughan), Jack Deveraux (Matthew Ashford) and Jennifer Horton (Melissa Reeves) in Chicago.

Dr. Wilhelm Rolf (William Utay) will also play a role in the drama, but he won’t cough up Kristen DiMera’s (Stacy Haiduk) secrets. Eric will try his luck with Vivian as well, but he’ll ultimately just have to search the townhouse where they’re staying. He’ll feel like Nicole Walker (Arianne Zucker) and Holly Jonas (Harlow and Scarlett Mallory) may have been there at one point in time.

Once Eric finds Holly’s blanket, he’ll recognize it and know he’s on the right track. Unfortunately, one of Kristen’s guards will attempt to stop Eric’s search for answers. He’ll hold Eric at gunpoint and Vivian will get caught up in the crisis. Luckily, Ben Weston (Robert Scott Wilson) will leap into hero mode once again and save Eric from a deadly fate.

Afterward, Eric will resume his search efforts. Days of Our Lives spoilers say a clue will lead him to a farmhouse, where Eric will face an intense reunion with Nicole. Their connection will be on full display as they breathe each other in. Over with Eli Grant (Lamon Archey), he’ll seethe over Gabi DiMera’s (Camila Banus) actions. Lani Price (Sal Stowers) will also find out Gabi left poor Julie Williams (Susan Seaforth Hayes) to die!

This will take place after Julie’s heart issue leads to her collapse. She’ll still make it to the hospital thanks to Ben and Ciara Brady (Victoria Konefal), but she could’ve gotten there sooner. Lani will likely argue that Gabi should be ashamed of herself.

Other Days of Our Lives spoilers say Vivian and Stefan will enjoy a sweet reunion, but Gabi will worry about the trouble that’s brewing. It sounds like there’ll be Vivian-Gabi drama right off the bat. Next, Ciara will listen to a suspicious pitch. Brady Black (Eric Martsolf) will try to sell Ciara on a job at Titan, so she’ll wonder why this is happening out of the blue. Ciara will definitely think there’s more to the story.

Sarah will obviously be happy that their lives were spared, but she’ll know this means the end of the road with Eric. However, Sarah will get the shock of her life when she later finds out she’s pregnant! As CDL predicted, Sarah indeed has a bun in the oven. She won’t know who the father is, so that’ll complicate matters even further.

Days spoilers state that some exciting scenes are on the way. We’ll give you updates as other DOOL news comes in. Stay tuned to the NBC soap and don’t forget to check CDL often for the latest Days of Our Lives spoilers, updates and news.