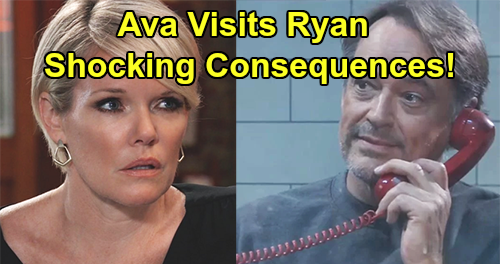 General Hospital (GH) spoilers tease that Ava Jerome (Maura West) will pay an unusual visit to someone during the week of July 29-August 2. She’ll head to Pentonville for a conversation with her twisted ex, Ryan Chamberlain (Jon Lindstrom)! It’ll be the first time Ava’s seen Ryan since she nearly killed him by stabbing him in the back.

Ryan still “loves” Ava and his obsession with her has not diminished one little bit. He’ll be absolutely delighted to see her. Of course, Ryan will think Ava’s visiting because she still loves him as well. Ryan will greet Ava with that assumption, but she’ll quickly insist that he’s wrong.

Ava will make it crystal clear that she’s not in love with Ryan and never really was; she was merely in love with an illusion. She fell for the person Ryan pretended to be, which was a strange version of his twin, Kevin Collins (Jon Lindstrom). Once Ava found out Ryan killed Kiki Jerome (Hayley Erin), the illusion was shattered and her feelings toward Ryan turned ice cold.

Will Ava Jerome’s Visit To Ryan Chamberlain Be Pointless?

Next, Ava will explain that she’s been working with psychics and has a task for him to accomplish. She’ll insist Ryan has to express remorse for murdering Kiki in order for her soul to be truly free.

Ryan is a sociopath who isn’t capable of real remorse, so Ava’s visit may be pretty pointless. He’ll think the fact that Ava’s listening to psychics at all is foolish.

Ryan picked up some knowledge when he passed himself off as Dr. Collins, so he’ll likely contend that this is about Ava’s guilty conscience. He may suggest Ava’s trying to absolve herself of her own guilt here. Ryan can’t express true remorse, but it wouldn’t help Ava even if he could. She has to face her own inner demons and find a way to make peace with what she’s done.

Ryan Chamberlain Needs To Release Her From His Twisted Love

However, Ryan would rather see Ava embrace her dark side. He might suggest that Kiki’s soul could write her off completely and be truly free that way. General Hospital spoilers say Ryan will want Ava to be the best version of herself, but that’d be the worst version to her or anyone else!

Ava will also tell Ryan she needs him to release her from his “love,” but Ryan won’t be able to do that. He’ll argue that he’s going to love her until the day he dies, but Ava would like to see that day come ASAP. Could Kiki closure lead to murder in this case? Could Ava plot another murder attempt if Ryan escapes? Will she get another chance to finish Kiki’s killer off?