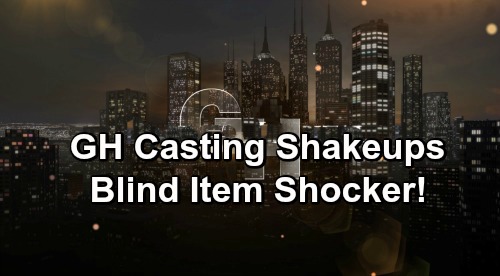 General Hospital (GH) spoilers tease that a new blind item points to some big changes at one of the four soaps. There’s no confirmation on which soap that might be, but GH is certainly a contender based on what we’ve seen so far. Soap Opera Digest is reporting that one daytime drama will experience more casting shakeups. General Hospital has had several of those lately, and there could be additional ones brewing.

In a move that left the soap world in shock, The Young and the Restless fired Gina Tognoni so that Michelle Stafford could reclaim the role of Phyllis Summers. Everyone seems to focus on the Phyllis swap, but we can’t forget that means a Nina swap, too. Stafford’s departure will make way for Cynthia Watros, who will start filming in early June.

Paulina Bugembe also recently debuted as a Valerie Spencer recast. Brytni Sarpy left the role to join Y&R as well, but General Hospital decided the character was too crucial to drop. It makes sense for Valerie to be involved in the Dawn of Day story, but time will tell if she’ll stick around after that. Many GH fans don’t seem sold on this version of Valerie yet.

Briana Nicole Henry took over the role of Jordan Ashford, which has taken some getting used to. She replaced Vanessa Antoine while Tajh Bellow replaced Tequan Richmond as T.J. Ashford. Since casting shakeups could apply to newbies, returns and exits, we shouldn’t limit it to recasts. Ingo Rademacher is back as Jasper “Jax” Jacks this week and Garren Stitt will soon wrap up his final scenes as a now dead Oscar Nero. Of course, Matt Cohen also departed as Dr. Griffin Munro not too long ago.

Who could be involved in the next casting shakeup? Many GH viewers have been concerned thanks to Stafford’s Y&R comeback. Could Billy Miller resume the part of Billy Abbott? He was quite popular in the role, so it wouldn’t be surprising if The Young and the Restless has their eye on him. That could open the door for Jason Thompson, who now plays Y&R’s Billy, to make a GH return as Dr. Patrick Drake.

There are other options to consider like Dr. Kim Nero (Tamara Braun) possibly leaving. Will there be enough drama to sustain Kim’s character without Oscar around? She can get by with grief for a while, but we’ll see if she can last beyond that. Shiloh Archer (Coby Ryan McLaughlin) will probably be killed at the end of his arc, so that could be a departure to watch out for.

Sasha Gilmore’s (Sofia Mattsson) future is a bit up in the air since she’s not Nina’s real daughter. Will she remain in Port Charles after the revelation? Time will tell, but you can see that there are plenty of casting questions to answer in the coming months. This blind item is a good fit, so it’s worth monitoring the situation.

Are there any casting shakeups that you’d actually like to see? Which characters do you want to stay or go? We’ll give you updates as other GH news comes in. Stick with the ABC soap and don’t forget to check CDL often for the latest General Hospital spoilers, updates and news.