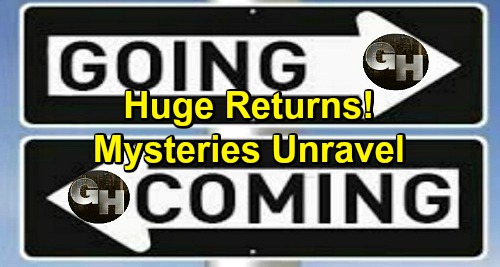 General Hospital (GH) spoilers reveal that we’ve got some comings and goings news to pass along. First, let’s talk about Lynn Herring’s (Lucy Coe) return to GH. We don’t see much of Lucy these days, but she’s currently back to show off the book she worked so hard on. Of course, her big event wasn’t exactly smooth sailing. Lucy managed to offend about half her guests with their terrible histories!

Lucy’s latest stint will continue with more conflict on Monday, so General Hospital fans will want to tune in. Ava Jerome (Maura West) will get an earful for dating “Dr. Kevin Collins” aka Ryan Chamberlain (Jon Lindstrom), but she won’t care what Lucy has to say about it. She’s falling for “Kevin” and he’s already fallen hard for her. That’s all that’ll matter to Ava as the walls continue to close in on Ryan.

We should also discuss Lulu Falconeri’s (Emme Rylan) dangerous situation. Ryan’s moving in to murder her, but there’s no need to panic. It doesn’t look like Lulu will become part of any comings and goings news. General Hospital spoilers suggest Lulu will be left fighting for her life after this encounter.

If GH was going to kill Lulu off, they probably wouldn’t bother letting her survive for a while. They’d just have her bite the dust like Kiki Jerome (Hayley Erin) did. In other words, the fact that Lulu will likely be gravely injured is actually a good sign. That’ll give Lulu’s loved ones a little home when things get bleak.

Other General Hospital spoilers say Robert Scorpio (Tristan Rogers) will make a comeback this week, January 21-25. He’ll get brought up to speed on Anna Devane’s (Finola Hughes) recent blindness and the mysterious virus that caused it. Robert will gladly help Dr. Hamilton Finn (Michael Easton) in his quest for answers. They both care about Anna and will be extremely curious about where this mystery will lead them.

In other GH news, Nicolas Bechtel has been spotted on set again. Spencer Cassadine is headed back to Port Charles, so viewers are already wondering what kind of trouble he’ll land in. Will Spencer’s election tampering finally come back to haunt him? Time will tell, but drama should erupt one way or another!