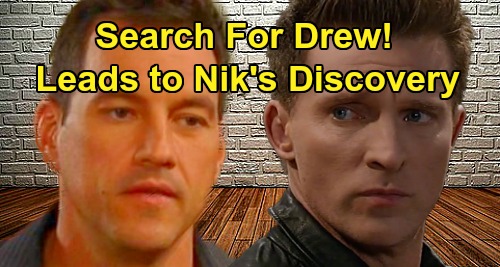 General Hospital (GH) spoilers tease that we could be gearing up for another story collision. GH fans know the show often likes to let storylines cross over into other ones. Shiloh Archer’s (Coby Ryan McLaughlin) story drifted over into the memory-mapping drama, which set up a new story for Franco Baldwin (Roger Howarth), Elizabeth Baldwin (Rebecca Herbst) and many other characters tied to it.

We’ve even got Liesl Obrecht (Kathleen Gati), who connects Valentin’s chaos to the “Wiley Cooper-Jones” story. She’s right in the middle of it all thanks to her secrets. The point is General Hospital likes to connect the dots and use twists to tie storylines together. With that in mind, perhaps the search for missing Drew Cain (Billy Miller) could head in a surprising direction.

Jason Morgan (Steve Burton) has been plopped into this, so maybe he’ll get a chance to play the hero. Meanwhile, Laura Webber (Genie Francis) will be taking on a major role in the codicil story. Psychic Chelsea Lambas (Jen Ray) warned that Laura’s son was in danger, so it’s just a matter of time until we see Nikolas Cassadine (Tyler Christopher) and what trouble he’s in.

Drew’s plane went off the radar, so there’s bound to be a search for it. Word has it the plane crash wreckage will ultimately be found, but will that be enough? Jason has pretty good instincts. He may smell a cover-up and keep digging. It’d be nice to see Jason fight for his brother’s safe return home. This could be a big step toward bonding one day.

However, Billy Miller just exited the role, so any plans to bring him back or have a recast step in would come down the line. Maybe GH has another plan in mind for now. What if the search for Drew leads to Nikolas’ discovery? It’s not unreasonable if you consider all the story collisions we mentioned. It would fit perfectly with General Hospital’s usual pattern.

Jason also teamed up with Laura at one point during the Ryan Chamberlain (Jon Lindstrom) mayhem. They took a trip to Niagara Falls together and ended up rushing to Ava Jerome’s (Maura West) rescue before Jason saved Carly Corinthos (Laura Wright). This could be an opportunity to have Jason and Laura’s missions collide once again.

Will Jason find some clues that help Laura out? He might be able to point her in Nikolas’ direction. Nik clearly needs assistance based on Chelsea’s warning. Someone will have to save the day, so it might as well be Laura and Jason.