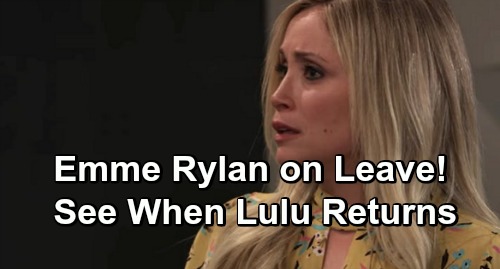 General Hospital (GH) spoilers tease that Lulu Falconeri (Emme Rylan) will be off canvas for just a bit. She recently decided to pack up Rocco Falconeri (O’Neill Monahan) and head to Paris, but she promised she wouldn’t stay gone long. Lulu wouldn’t bail on Charlotte Cassadine (Scarlett Fernandez) for any lengthy amount of time. She just needs a little trip to recharge and clear her head.

GH fans know Dante Falconeri’s (Dominic Zamprogna) departure really hit Lulu hard. She thought he was home for good, but now she’s worried she’s lost him forever. That’s why this Paris getaway will prove beneficial for Lulu. Her wounds are fresh, so it’s tough to be in the house without Dante right now. Lulu will enjoy gaining a new perspective in a different environment.

Peter August (Wes Ramsey) assured Lulu that her job would be waiting for her when she got back. He also encouraged Lulu to write a book detailing her unique experiences. Peter feels like people would be interested in what Lulu has to say regarding Ryan Chamberlain (Jon Lindstrom) and the nightmare she faced. Maxie Jones (Kirsten Storms) has faith in her bestie’s writing abilities as well.

Perhaps Ryan will play a role in why Lulu comes back to town. As that storyline heats up again and Ryan’s threat gets closer, Lulu may get involved once more. It turns out Lulu will keep her promise about not staying away too long. GH viewers will barely even have time to notice she’s been gone.

Lulu pops up in General Hospital spoilers for April 24, which is the day she shows interest in helping. General Hospital spoilers also reveal that Lulu will shock Peter on April 25. She may reappear with some sort of Paris epiphany about how to write this book or sell some angle of a new story. Whatever the case, this info makes it seem like Lulu will be right back where she belongs by then.

It should come as no surprise since Emme Rylan recently renewed her contract. Lulu’s future in Port Charles is bright, so maybe a new love interest will head her way down the road. We’ll give you updates as other GH news comes in. Stay tuned to the ABC soap and don’t forget to check CDL often for the latest General Hospital spoilers, updates and news.