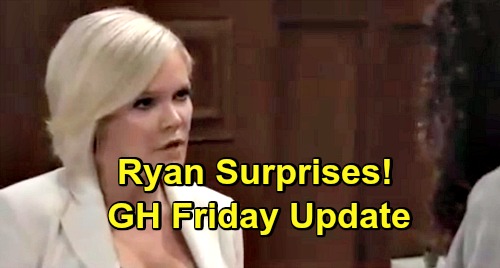 General Hospital (GH) spoilers for Friday, April 12, tease that Dr. Kevin Collins (Jon Lindstrom) will head back to court. As he wrestles with what he’s done, Kevin will get guidance from his attorney, Nora Buchanan (Hillary B. Smith). Nora will note that guilt and responsibility are two very different things when it comes to the legal system. Kevin can blame himself, but that doesn’t mean he deserves to land in prison.

Ryan Chamberlain (Jon Lindstrom) is the one who went around town killing people and pinning crimes on innocent parties. Kevin’s actions set that in motion, but he didn’t wield the murder weapon himself. General Hospital spoilers say Nora will help Kevin out of his jam, so that’ll just leave his personal guilt to deal with.

Thankfully, Laura Webber (Genie Francis) will start softening toward Kevin soon enough. She’ll begin to move past the pain of his secrets and hopefully find a way to move forward. Meanwhile, Ava Jerome (Maura West) will corner Jordan Ashford (Briana Nicole Henry). She’ll want to know where Jordan stands on the matter of Ryan’s death. Is Ryan still breathing somewhere or not?

Jordan may direct Ava’s attention to the updates she recently received. Forensics got in touch about the hand that was severed from Ryan’s body. Their findings show it was detached while Ryan was alive, so Jordan and Ava may agree their theory was correct. They’ll probably assume Ryan faked his demise and plans to stage a gruesome Port Charles comeback.

Of course, Ava will be prepared this time around! She’ll refuse to sit around and wait on Ryan to strike. While Ava gets ready to unleash her wrath, Laura will reach out to Dr. Hamilton Finn (Michael Easton). She’ll get him to weigh in on the possibility of Ryan’s survival, but it’s easy to see that Ryan is indeed coming back. What would be the point of all this speculating if he wasn’t?

Margaux Dawson (Elizabeth Hendrickson) will be in the dark on several Ryan-related details. She may not like it when she figures out what’s up, but she’ll just have to get over it. Jordan wants Curtis Ashford (Donnell Turner) to do some investigating in Canada, but he’ll be focused on his wife’s health. Curtis will decide to confide in Nina as he frets over the kidney Jordan still hasn’t gotten.

Other General Hospital spoilers state that Robert Scorpio (Tristan Rogers) will reassure Anna Devane (Finola Hughes). He’ll contend that Robin Scorpio-Drake (Kimberly McCullough) is Anna’s daughter and that’s all there is to it. Robert won’t even entertain the possibility that Alex Devane Marick (Finola Hughes) wanted that memory manipulated.

GH spoilers say Peter August (Wes Ramsey) is the one who likely belongs to Alex. That news should rattle both Peter and Anna down the road, so stay tuned. Until then, Valentin Cassadine (James Patrick Stuart) and Spencer Cassadine (Nicolas Bechtel) will push each other’s buttons. The topic of election tampering will arise once again, so Valentin will remind Spencer that the truth will inevitably come out.

Valentin needs to worry a little less about Spencer’s secret and a little more about his own! His warning will prove accurate for himself when Nina Reeves (Michelle Stafford) eventually learns the truth about Sasha Gilmore (Sofia Mattsson). We’ll keep you posted as other GH info comes in. Stick with the ABC soap and don’t forget to check CDL often for the latest General Hospital spoilers, updates and news.