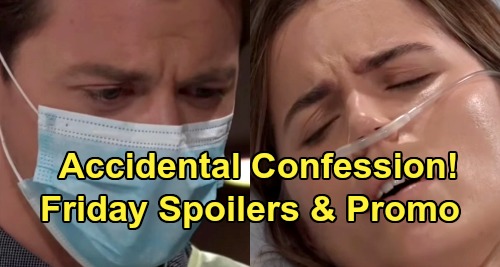 General Hospital (GH) spoilers for Friday, August 23, tease that Ava Jerome (Maura West)) will face a night of misery. She already admitted to having a dream about Kiki Jerome (Hayley Erin) at the foot of her bed. Ava will have a more vivid and interactive dream this time, so GH fans can expect some gripping scenes.

Hayley Erin will be back as angry Kiki talks to her mother. General Hospital spoilers say Ava will remain distraught over Kiki’s refusal to patch things up. She’ll get choked up and beg Kiki to tell her what to do. Ava will assure Kiki that all she wants is her love and forgiveness, but it looks like Kiki still won’t budge.

Over with Peter August (Wes Ramsey), he’ll get a fierce warning from Robert Scorpio (Tristan Rogers). Robert will warn Peter to stay out of his way or risk obstruction of justice. This may tie in with Robert’s mission to bring Shiloh Archer (Coby Ryan McLaughlin) down, but he won’t realize Peter just agreed to help the incarcerated cult leader.

Meanwhile, Cameron Webber (William Lipton) will be taken aback by Josslyn Jacks’ (Eden McCoy) news. She’d like to be homeschooled, complete her studies with a tutor or basically do anything that helps her avoid the halls where Oscar Nero Quartermaine (Garren Stitt) walked. All the typical teen drama seems so inconsequential to Josslyn now.

Sonny Corinthos (Maurice Benard) and Carly Corinthos (Laura Wright) want Joss to give regular school a shot, but Sonny suggested they’d make other arrangements if things didn’t work out. Josslyn will bring Cameron up to speed on all that, so he’ll worry she’s going to bail on him. He’s quite close to Joss, so he’ll undoubtedly push her to stick around and go to her usual classes with him.

General Hospital spoilers say Jasper “Jax” Jacks (Ingo Rademacher) may side with Sonny for once. He’ll have a chat with Carly and likely argue that Joss’ happiness has to come first. However, Carly doesn’t want Oscar’s death to hold Josslyn back. She’ll insist they can’t let their daughter run away, so she’ll hope they can all work together and help Josslyn press on.

Unfortunately, Drew’s mission will end in catastrophe. It sounds like he’ll be presumed dead in a plane crash or find some other tragic fate that prevents his return. An upsetting email is headed Sam’s way, so that might connect to this story.

At GH, Michael Corinthos (Chad Duell) will listen as a delirious Sasha Gilmore (Sofia Mattsson) wonders if this illness is her punishment. She’ll fret about all this being what she deserves, so Michael is sure to be perplexed. Sasha will manage to keep her fake daughter shocker quiet for now, but some stunning test results are looming for Hamilton Finn (Michael Easton) on new GH episodes next week, August 26 to August 30.