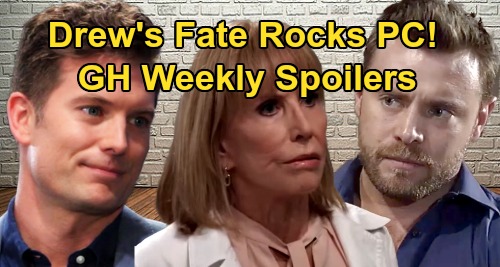 General Hospital (GH) spoilers for the week of August 26-30 tease that we’ll see some fun moments along with some heartbreaking ones. First, let’s talk about the fun! Alexis Davis (Nancy Lee Grahn) will decide she needs a workout buddy, so she’ll convince Diane Miller (Carolyn Hennesy) to tag along. Diane and Alexis will likely have a hilariously bad time at their upcoming class.

Mac Scorpio (John J. York) and Felicia Scorpio (Kristina Wagner) will also have some fun this week. They’ll be on babysitting duty, so they should enjoy having a chance to bond with little James West. Maxie Jones (Kirsten Storms) should appreciate the help since she’s a busy woman these days.

Other General Hospital spoilers say Willow Tait (Katelyn MacMullen) will choose a hopeful attitude. She’ll feel like her year has gone horribly so far, but she’ll plan to change that. Willow will take steps to make sure the last few months of 2018 work out better for her.

Over with Harrison Chase (Josh Swickard), he’ll barge in on a family get-together. Of course, Chase will likely have a good reason. Chase may be at this gathering on official police business. At GH, some shocking test results will leave Hamilton Finn (Michael Easton) reeling. Will he realize there’s no way Sasha Gilmore (Sofia Gilmore) is Nina Reeves’ (Cynthia Watros) biological daughter?

Regardless, a different shocker is ahead for Nina this week. She’ll be taken aback by a text message she receives. It seems likely Cassandra Pierce (Jessica Tuck) will send that selfie she took with Sasha and Michael Corinthos (Chad Duell). Michael will find himself feeling bamboozled a bit later. He’ll rush to the police station with Sonny Corinthos (Maurice Benard), so that may involve the Cassandra case.

Back with Mac, he’ll get an intriguing offer from Jordan Ashford (Briana Nicole Henry). Will Jordan want Mac to stay on as police commissioner or perhaps slide into a different role at the PCPD? It’d be nice to see Mac stick around and keep getting a little more airtime.

Next, we should mention Dustin Phillips’ (Mark Lawson) heroic move. He’ll pitch in once he realizes someone needs his help, so maybe that someone will be Lulu Falconeri (Emme Rylan). GH is looking for ways to push them closer right now.

Elsewhere, Valentin Cassadine (James Patrick Stuart) will offer Curtis Ashford (Donnell Turner) a boatload of money. He’ll have a top-secret mission for Curtis and judging by the amount of cash he’ll be willing to fork over, it’ll be dangerous, shady or both. This could involve tracking down Cassandra or doing more Sasha damage control. Valentin’s main concern will be protecting his family in more ways than one.

Other General Hospital spoilers say Jason Morgan (Steve Burton) will have a tough talk with Monica Quartermaine (Leslie Charleson). Kim Nero (Tamara Braun) will also find herself distraught in Oscar Nero Quartermaine’s (Garren Stitt) meadow. It sounds like Drew Cain’s (Billy Miller) loved ones will be processing the news of his presumed death, which will likely happen due to that flight to Afghanistan.