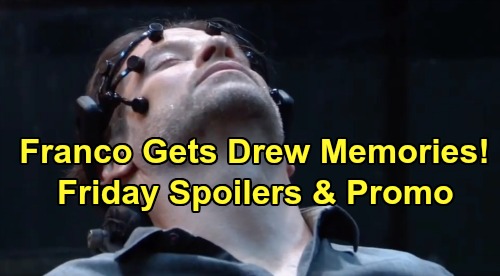 General Hospital (GH) spoilers for Friday, August 9, tease that Robert Scorpio (Tristan Rogers) will deliver bad news to Maxie Jones (Kirsten Storms). Peter August (Wes Ramsey) will be on hand as well, but Robert clearly won’t enjoy his presence. He’ll contend that Maxie’s going to be sorry she ever crossed the path of this “dirtbag.”

Robert’s updates may involve more Dante Falconeri (Dominic Zamprogna) drama. He might remind Peter of his old mistakes and blame him for the shooting incident. Of course, Maxie will defend Peter and offer reassurance later. She won’t want anyone getting in Peter’s head and convincing him he’s not worthy of love.

Meanwhile, Lulu Falconeri (Emme Rylan) will want to get her life back on track. She’ll remain distraught over Dante, but she’ll feel like she has to pick up the pieces somehow. General Hospital spoilers say Lulu will turn her attention to Willow Tait (Katelyn MacMullen) on Friday. There’ll be some sort of misunderstanding for Willow in this episode, so it might involve Lulu’s latest pitch.

Willow will suggest she’ll let Lulu know if she changes her mind. Lulu won’t think that’ll be the case, but she’ll contend that they can see what happens. No matter what Lulu’s referring to, it’s nice that she’ll be sober and walking around town. It’s not good for Lulu to stay home wallowing and drowning her sorrows, so this is a good first step toward moving on.

Liz will let Harrison Chase (Josh Swickard) know she intends to go look for her son. Chase may think the cops should handle this, but it’s tough to stop a determined and distraught mom! It looks like Drew will work to ease Liz’s worries or the worries of someone else close to Cameron. He’ll insist everything’s going to be fine, but GH fans know Franco Baldwin (Roger Howarth) is in deep trouble. Liz will get a horrifying phone call about this situation soon enough.

Shiloh Archer (Coby Ryan McLaughlin) agreed to a trade, so Dr. Arthur Cabot (Time Winters) will complete the memory prep on Friday. General Hospital spoilers say Shiloh will get impatient, but the doc will note that he’s in process now. Franco will be unconscious and hooked up to the necessary devices as Cameron cries nearby. It won’t be long until Franco indeed has Drew’s memories, so any help that arrives will come too late.

Finally, Lucas Jones (Ryan Carnes) will have additional information. It seems he’ll know a bit more about what Sasha Gilmore’s (Sofia Mattsson) up against, but it may not be what Nina Reeves (Cynthia Watros) wants to hear! We’ll keep you posted as other GH details emerge. Stay tuned to the ABC soap and don’t forget to check CDL often for the latest General Hospital spoilers, updates and news.