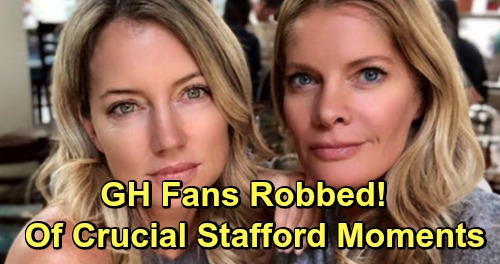 General Hospital (GH) spoilers tease that some new info points to a longer wait. GH fans are eager to see Sasha Gilmore (Sofia Mattsson) and Valentin Cassadine’s (James Patrick Stuart) secret explode, but it could take longer than anyone anticipated. That’s not a good thing and there are a couple reasons why.

For starters, viewers are simply ready for the truth to come out. At least with the Dawn of Day plot and the “Wiley Cooper-Jones” story, there are all kinds of layers and connections. These storylines intersect in surprising ways, which adds some interest and keeps General Hospital fans guessing.

With the fake daughter scam, it seems pretty straightforward. Sasha isn’t Nina Reeves’ (Michelle Stafford) real daughter – no matter how bad she wishes she was. GH can add some excitement later through Nina’s true bio kid, but the Sasha shocker is the easy part. Why not go ahead and pull the trigger on Nina’s devastation?

Many GH viewers thought the Nurses Ball would be the perfect time and place. Alas, it’s not going to happen. General Hospital spoilers say Sasha will join Nina for a mother-daughter lunch on May 29. They’ll still be bonding just before June kicks off, so that can’t be good. When is GH going to drop this bomb already?! Could they actually let Stafford’s Nina disappear without playing this out?

Stafford will still be onscreen in June, but we’re running out of time here. Even if General Hospital manages to squeeze in the Sasha revelation, what about the proper aftermath? It’s not right to deny fans of that after we’ve waited this long to see Stafford’s Nina erupt. Cynthia Watros will undoubtedly be great when she hits the air, but it just won’t pack the same punch.

Of course, it’s possible GH already wrote the big reveal for later and just kept it that way. They may not have altered their plans because of Stafford’s decision to leave General Hospital and rejoin The Young and the Restless. It would’ve been wise to make some adjustments, but perhaps they just left things alone.

Regardless, it’s surprising that the Sasha drama won’t be part of May sweeps. Some fans even hoped Willow Tait (Katelyn MacMullen) might be revealed as Nina’s true daughter before Stafford’s departure. It seems we’ll be lucky if they expose Sasha before then. GH viewers just have to get used to Watros in the role and hope she can sell the same explosive moments we’ve been building to.