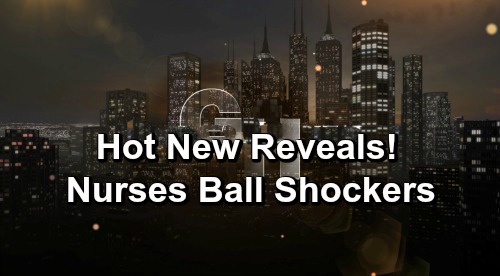 General Hospital (GH) spoilers tease that several storylines will heat up as May sweeps continues. Naturally, the Nurses Ball be a huge part of the action later this month. We’ve got some hot new GH spoilers for Port Charles’ most-anticipated event, so let’s take a look at what’s in store.

For starters, Ava Jerome (Maura West) will make a splash thanks to the handsome man on her arm. It sounds like her plan with Dr. Kevin Collins (Jon Lindstrom) will still be going strong. Ava and Kevin should cause quite a stir with their arrival, but they’ll ignore the nasty glares and focus on Ryan Chamberlain (Jon Lindstrom). Word has it the Nurses Ball is when Ryan will make his big comeback.

Will Ryan pull another switcheroo during this glamorous evening? If he can keep his lack of a hand hidden, he might get by with it briefly. Ryan would only need a moment to snatch up Ava and take her to the location of his choosing. Of course, that could backfire since Ava’s so full of rage. No matter how this plays out, there’s no outcome that’ll be a positive one for Ryan!

However, GH fans will see some hijinks in the meantime. General Hospital spoilers say Lucy Coe (Lynn Herring) and Scott Baldwin (Kin Shriner) will have a few tricks up their sleeve. They could make some messes as Ava and Kevin try to see their plot through to the end.

Other General Hospital spoilers hint that Laura Webber (Genie Francis) and Curtis Ashford (Donnell Turner) will find themselves in a tight spot. They’ll be backed into a corner, so will Ryan be to blame? It’s easy to imagine them getting trapped and unable to warn Kevin or Ava. You can bet Ryan will be causing chaos all over the place.

Over with Sonny Corinthos (Maurice Benard), he’ll have something surprising to announce. Will this be related to the Nurses Ball itself or one of the stories he’s involved in? Sonny has been wrapped up in Dawn of Day drama, but it may take a bit of a backseat to Ryan during the festivities. Carly Corinthos (Laura Wright) is also pregnant, so Sonny’s announcement might involve the baby’s gender or health.

Next, Nina Reeves (Michelle Stafford) will be absolutely over the moon. It looks like Michael Corinthos (Chad Duell) will ask Sasha Gilmore (Sofia Mattsson) to be his Nurses Ball date, so Nina will be ecstatic for them. She’ll feel like everything’s going great in her life as well as her “daughter’s,” but a bomb’s about to drop.

There’s a good chance Valentin Cassadine’s (James Patrick Stuart) scheme will be exposed before May sweeps is over, so Nina should be thrown for a loop. Finally, General Hospital viewers can expect plenty of great performances on stage. It seems likely that Josslyn Jacks (Eden McCoy) will perform in memory of Oscar Nero (Garren Stitt) – perhaps with an assist from Cameron Webber (William Lipton).