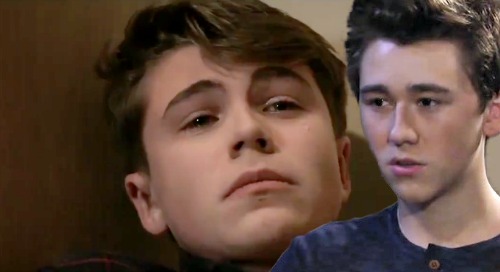 General Hospital (GH) spoilers tease that Josslyn Jacks (Eden McCoy) will have a hard time finding a way forward. It was heartbreaking to watch Joss break down over Oscar Nero’s (Garren Stitt) recent demise. As Josslyn embraced a concerned Carly Corinthos (Laura Wright), she admitted she didn’t know what to do. Without Oscar by her side, Joss just feels like she’s floating in this abyss of crushing grief.

However, Joss could find a purpose through Oscar’s parting gift. She was deeply moved when Ned Quartermaine (Wally Kurth) handed over the finished song. Oscar wanted to make sure it was done before he left Josslyn behind, so he recruited Ned to help him out with it.

That song could become Josslyn’s source of comfort and strength. She’ll likely decide to honor Oscar’s memory by doing the Nurses Ball performance without him. Of course, it could be tough for Joss to gather the courage. She might even consider backing out at some point, but perhaps someone special will keep her focused on her goal.

Since Josslyn was planning a duet with Oscar, it makes sense that Cameron Webber (William Lipton) will fill in for his pal and Joss’ boyfriend. He would probably be hesitant at first, but Joss might insist she can’t do it without him. This could be a great way for General Hospital to help Josslyn and Cameron deal with their grief together.

William Lipton is a musician and songwriter on the side, so he often posts videos of himself singing and playing the guitar on Instagram. He’d probably love the chance to join Eden McCoy for this special performance. If GH throws in a quick shot of a healthy, angelic-looking Oscar watching them, that’d be a truly fitting conclusion to this goodbye arc.

GH has done a fantastic job with this storyline, so fans are eager to see this period of mourning and watch how Oscar’s loved ones cope. General Hospital spoilers say there’ll be some major bumps in the road, but Oscar’s friends and family members will do their best to press on. It’s what Oscar would want.

Do you hope Cameron will take Oscar’s place for the Nurses Ball performance? Will they share the song Oscar completed and use it as one last farewell? We’ll give you updates as other GH news comes in. Stay tuned to the ABC soap and don’t forget to check CDL often for the latest General Hospital spoilers, updates and news.