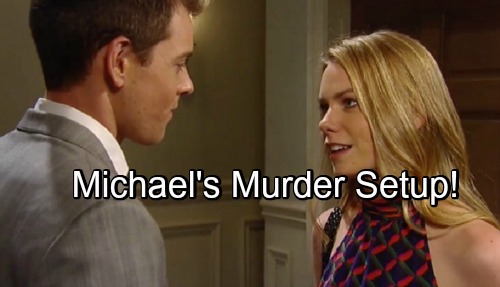 General Hospital (GH) spoilers say Chase (Josh Swickard) and Michael (Chad Duell) will carry out a twisted scheme. That’s really the only type of strategy Nelle (Chloe Lanier) responds to. They have to fight fire with fire! Based on the latest clues, it looks like Michael willput Nelle in a familiar situation. He’ll hope to set up Nelle’s takedown and finally protect his family.

On a new GH episode, July 10, Nelle will get some news that leaves her stunned. Michael will also offer an apology, so he may be the one who rattles her a bit. That’s undoubtedly part of the plan. Since Chase will push Michael to fake his death, this could tie in with that. Perhaps Michael will suggest some adjustments in his will. He could contend that they need to change it in case disaster strikes.

Michael might promise to sign everything over to Nelle in case she suddenly becomes a widow. Nelle would love to have all that Corinthos-Quartermaine cash, but Michael’s updates could still spark concern. After all, this is exactly what transpired before Zach’s demise.

GH fans still don’t know if Nelle killed her fiancé. Back when Michael confronted Nelle on the footbridge, she gave a convincing declaration of innocence. It seemed like a rare moment of sincerity for the normally deceitful Nelle. Lanier’s delivery was different than usual in that episode.

Of course, none of that matters now that Nelle’s exiting. General Hospital writers obviously want something that fits the departure story. They might’ve planned on making Nelle innocent at the time, but now she could be a murderous monster. It’d make more sense for Nelle to truly be guilty.

Regardless, Nelle may be hit with fear over Michael’s will. She might worry that she’ll land in some other tight spot and have to wiggle out of it. The last thing Nelle needs is the Corinthos family coming after her like the Grants did.

However, Michael’s a pro at calming Nelle down. He may insist that nothing bad will happen to him. Michael could argue that this is just a precaution and convince Nelle that it’s best to take care of it now.

General Hospital spoilers say Michael will indeed contact Alexis (Nancy Lee Grahn) later. Will he actually have the will adjustments made? This has to look legit, but Michael could be taking a huge risk. Fortunately, we know Nelle won’t score all Michael’s money. She’s leaving the show, so she’s destined for a terrible outcome.

Once Michael completes the first step toward “death,” what’ll be the next one? With Chase’s help, can they walk Nelle into a trap? She could be accused of attempted murder if things go their way. As for Michael, let’s hope he can stay safe! We’ll keep you posted as other details emerge. Stick with ABC’s GH and don’t forget to check CDL often for the latest General Hospital spoilers, updates and news.