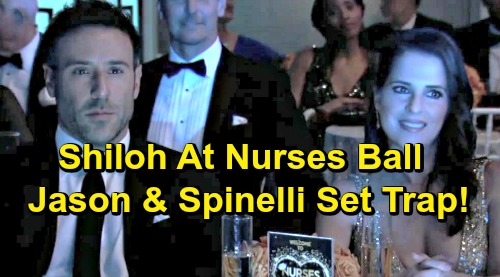 General Hospital (GH) spoilers tease that Jason Morgan (Steve Burton) will put a plot in motion, but he won’t be happy about it. Since Sam McCall (Kelly Monaco) will attend the Nurses Ball with Shiloh Archer (Coby Ryan McLaughlin), that’ll leave him out of the community house. The rest of the DoD gang will be gone, too. For a place that’s supposedly full of loyal followers, no one ever seems to be around!

Nevertheless, this is great news for Jason. He can hopefully get in there and do what he has to do without getting caught. Jason and Damian Spinelli (Bradford Anderson) will plan to bug the place while Shiloh’s out. They’ll set up listening devices and as well video recording equipment, so they’ll hope they’ve got everything ready for Shiloh’s trap.

Before Sam heads out to the big shindig, she’ll offer some vague info to Alexis Davis (Nancy Lee Grahn) and Dr. Neil Byrne (Joe Flanigan). General Hospital spoilers say Sam will be determined to protect her sister. Kristina Corinthos-Davis (Lexi Ainsworth) has seen the light when it comes to Shiloh, but Sam will fear she could drift back toward him – especially with Krissy’s pledge hanging over her.

Sam will assure Neil that her plot will make a difference. She won’t offer any details, but she’ll insist this will cement Kristina’s decision to leave DoD. General Hospital spoilers say Sam will feel confident in her strategy. She’ll argue that by the time she’s through with Shiloh, there’ll be no chance of Kristina reconnecting with him.

Naturally, all of this will be a bit too cryptic for Alexis’ taste. She’ll wonder what Sam’s gotten herself into now. Alexis will demand to know how Sam plans to pull off this permanent break. She won’t understand, but Sam will suggest that everything will make sense in time. For now, Sam just has to focus on keeping Shiloh out of the Dawn of Day house for as long as possible.

However, GH spoilers say Sam will end up bailing on the Nurses Ball early. It seems Shiloh may be the one who nudges Sam toward the door. Will Jason slip out before Shiloh returns or will he get caught setting up the scheme? Will part of Jason want to get caught? That’d certainly give him an opportunity to launch an attack and stop Sam’s outrageous plot.