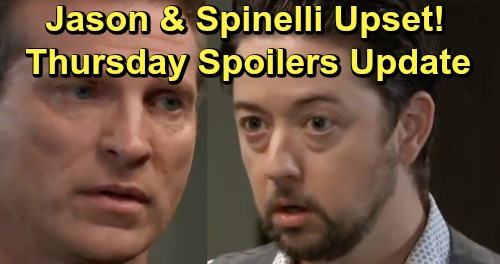 General Hospital (GH) Spoilers update for Thursday, May 16, tease that Carly Corinthos (Laura Wright) will await updates at GH. Her test results will be back, so Carly will just want to know if her baby’s healthy. She’ll push the doctor to share the big news, so let’s hope all is well for Carly and Sonny Corinthos’ (Maurice Benard) little one.

Meanwhile, Sonny will tackle a different crisis. He’ll be taken aback by the ring Mike Corbin (Max Gail) somehow ended up with. Sonny will talk to Michael Corinthos (Chad Duell) about Mike’s proposal to Yvonne Godfrey (Janet Hubert). They’ll both be puzzled over where Mike got this engagement ring and who the true owner might be, but they’ll resolve to figure it out.

Over with Dr. Hamilton Finn (Michael Easton), he’ll decide he’s head enough. Finn finally got Robert Scorpio (Tristan Rogers) to give him the ring back, but he was given the wrong one. The doc spotted the phony right off the bat, so he’s wondering what Robert’s trying to pull! When Robert continues to give him the runaround, Finn will determine it’s time to get Harrison Chase (Josh Swickard) involved.

After Chase heard about Finn’s problems with Robert and the ring, he pointed to his badge and suggested he could help Finn take care of this. Finn will go to his brother on Thursday and suggest he needs his help after all. Chase will likely do whatever he can to fix this for Finn. He knows Anna Devane (Finola Hughes) makes Finn happy, so he’s eager to see them make this engagement official.

Speaking of Anna, she’ll tell Peter August (Wes Ramsey) that a proposal seems to be brewing. Anna will hear about Peter’s adventures in Canada, too. It’s not the date Peter had in mind, but it still brought a wonderful night with Maxie Jones (Kirsten Storms). Peter will be hopeful about his future with Maxie, so he’ll thank Anna for believing in him.

Other General Hospital spoilers say Molly Lansing-Davis (Haley Pullos) will meet up with her sister. Kristina Corinthos-Davis (Lexi Ainsworth) will think they have to do something. She’s in the dark on Sam McCall’s (Kelly Monaco) plot, so she’ll believe Sam’s falling for Shiloh Archer’s (Coby Ryan McLaughlin) manipulation.

Kristina will call Shiloh a predator as she seeks Molly’s assistance. GH fans can expect an intriguing idea from Molly. She’ll present this idea to Peter later, but she’ll obviously conceal her true motives. Molly and Kristina will hope that if they put their heads together, they can break Sam free from Shiloh’s grasp.

Of course, Sam believes she’s got everything under control. She’ll tell Damian Spinelli (Bradford Anderson) and Jason Morgan (Steve Burton) what they’re going to do on Thursday. Sam will point out that Shiloh will be attending the Nurses Ball with her, so that’ll leave the DoD house clear all night. She’ll instruct Spinelli and Jason to set up the initiation recording equipment while they’re gone.

While Jason warns Sam about the risks, Julian Jerome (William deVry) will get a favor. Alexis Davis (Nancy Lee Grahn) will show up to rescue him, so maybe she can make his legal problems disappear. Elsewhere, Dr. Kim Nero (Tamara Braun) will get support from Drew Cain (Billy Miller). Drew will sense that Kim might be headed out of town, so he’ll make it clear that she should stay in Port Charles.

General Hospital spoilers say there’s more drama coming for Kim in PC, which must mean Drew will get through to her. Finally, what about Laura Webber (Genie Francis) in Canada? Was that Ryan Chamberlain (Jon Lindstrom) who had Laura screaming at the top of her lungs? How will Laura get out of this jam?

It looks like some crazy moments are on the way! We’ll keep you posted as other GH details emerge. Stay tuned to the ABC soap and don’t forget to check CDL often for the latest General Hospital spoilers, updates and news.