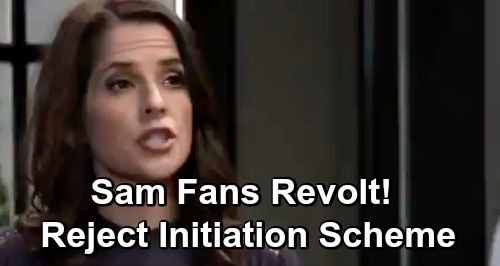 General Hospital (GH) spoilers tease that Sam McCall’s (Kelly Monaco) crazy plan will press on. Where in the world is the real Sam and who is this woman offering to let someone sexually assault her? None of this makes sense to loyal GH viewers who know and love the character.

When Sam came to Port Charles, she had a con artist past. Sam married men for money to support her special-needs brother after their adoptive mom kept him locked in a basement for years. Sam had no education and lacked other opportunities, so she was just doing the best she could.

GH viewers know Sam was 17 when she found Danny McCall (David Greenman), and she couldn’t allow her brother to be abused like that. Taking down Shiloh Archer (Coby Ryan McLaughlin) is not a life-and-death matter, but saving Danny was. Sam had a legitimate reason to go to extremes back then. There’s no need to go this far with Shiloh.

Furthermore, Jason Morgan (Steve Burton) would never agree to this. Jason was devastated when he thought Franco Baldwin (Roger Howarth) raped Sam on their honeymoon. His hatred for Franco almost killed him in 2012 by irritating swelling on his brain. Jason loves Sam and wouldn’t get on board with this plan – no matter who Sam was trying to save. It’s bizarre that Jason isn’t putting his foot down.

Sonny Corinthos (Maurice Benard) wouldn’t want Sam taking a chance like this either. Sam is setting herself up to get hurt without any guarantees of a hero swooping in. Alexis Davis (Nancy Lee Grahn) thinks Shiloh could land in prison if he uses Kristina’s pledge for coercion, and she’s probably right. However, Alexis has no idea the secret is about her; she believes it’s about Sonny like everyone else.

Shiloh may think he owns the law in Port Charles, but Sonny and Jason could easily make him disappear. That’d be the end of Shiloh. Why would Jason not push for that over Sam’s disgusting strategy? How can he stand by and let Sam go through with the initiation just to be recorded?

General Hospital fans know Willow Tait (Katelyn MacMullen) has already been through this and could testify against Shiloh. That’d be far better than the route Sam wants to take. Why would any sexual assault victim do something so stupid? Sam may think she’s playing Shiloh, but Shiloh has cameras all over. The pictures in Sam’s file should’ve proven that to her.

Sam has been a P.I. for years, so there’s no reason for her not to notice this. Will Sam come to her senses or will she subject herself to rape for a recording? Will Jason intervene after all? Do you agree it’s appalling for sexual assault survivor Sam to even suggest this scheme?