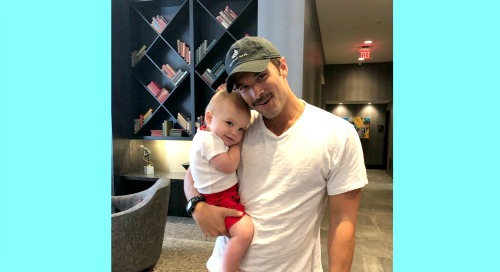 General Hospital (GH) spoilers reveal that one ABC soap star is getting some birthday love on this Fourth of July. Josh Swickard’s (Harrison Chase) birthday happens to fall on Independence Day, so he’s got two great reasons to celebrate. He received plenty of sweet messages on social media from both fans and his GH costars.

Eden McCoy (Josslyn Jacks) always posts lots of behind-the-scenes content that features Swickard. She thinks of Swickard and Chad Duell (Michael Corinthos) like her big brothers on set, so Swickard tied that in with his response to her birthday message. It’s great that many General Hospital’s cast members have such a strong bond.

“Happy Birthday @josh_swickard , you truly are everything good in the worldand I looove you,” McCoy said. She posted a pic of Swickard doing a funny pose, which clearly amused her costar. “Hahahahaha thank you sis,” Swickard replied.

Michelle Stafford (ex-Nina Reeves on GH, currently Phyllis Summers on The Young and the Restless) sent out a tweet agreeing with McCoy. Swickard seems like a real sweetheart who’s known for being easy-going at the studio. Paulina Bugembe (Valerie Spencer) had a message to pass along as well. She tweeted, “Happy birthday Josh!!!!” along with some festive emojis.

A little later, Swickard told everyone what he was up to for his joint birthday and Fourth of July celebration. “Spending my birthday with family! ALL LOVE,” Swickard tweeted. He posted a pic of himself cuddling a baby in the fam, so it doesn’t get any more adorable than that.

Swickard also happened to be sporting a mustache in this photo, which General Hospital fans might have some mixed feelings about. However, he’ll undoubtedly get rid of it before it’s time to shoot new scenes. Chase should have his usual full-face stubble or a clean shave in the coming weeks, so there’s no need to worry if you aren’t feeling the ‘stache!

General Hospital spoilers say Chase and Willow Tait (Katelyn MacMullen) have much more drama to come. “Chillow” has become a hot couple for the show, so everybody’s anxious to see the road ahead. We’ll give you updates as other GH news emerges. Stay tuned to the ABC soap and don’t forget to check CDL often for the latest General Hospital spoilers, updates and news.

Spending my birthday with family! ALL LOVE ❤️ pic.twitter.com/es7hdmSRoy