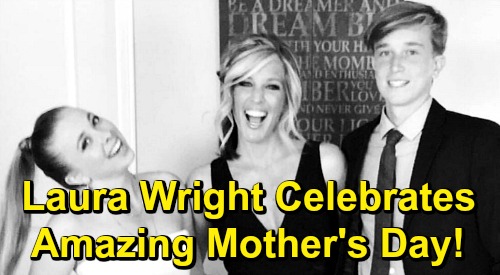 General Hospital (GH) spoilers have some great news to pass along about Laura Wright, who portrays Carly Corinthos on the ABC soap. She posted several photos of herself along with her kids on social media this weekend to celebrate Mother’s Day.

The gorgeous black-and-white photos tell a beautiful story of motherhood. They include several photos of Laura with her daughter Lauren Beth Wright and son John Michael Wright, and the slide show ends with a photo of Laura nose to nose with her adorable German Shepherd.

Laura captioned the photos as follows: “I love being your mom!!! Thank you for picking me!!! #mothersday2019 #MyBabies.” Her daughter promptly responded to her post with several heart emojis. And Laura’s on-screen daughter, Eden McCoy, responded with: “I loooove you. Best TV mom, mentor, and caring soul.”

It’s great to see Laura celebrating motherhood and enjoying time with her kids, especially since 2018 was such a tough year for her. GH viewers may remember that Laura lost both of her parents toward the end of last year. At the time, she noted that she was trying to be positive and grateful, and that she was excited about what 2019 had to bring. It looks like she’s following through with her vow of positivity and celebrating her family with gusto.

Of course, we can’t help but remember that Laura’s character, Carly Corinthos, has been dealing with lots of motherhood issues on GH lately. Carly’s currently got a high-risk pregnancy going, and she’s been offering lots of extra love and support to her daughter Josslyn Jacks (Eden McCoy), since Josslyn has lost her boyfriend Oscar Nero Quartermaine (Garren Stitt) to brain cancer.

We wish Laura and all the moms out there a Happy Mother’s Day! Stay tuned to the ABC soap and don’t forget to check CDL often for the latest General Hospital spoilers, updates, and news.