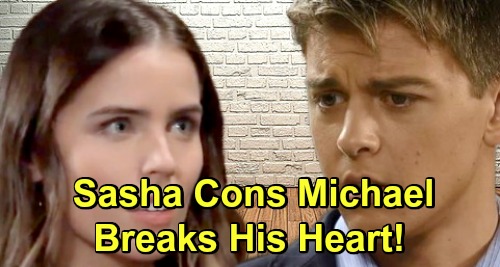 General Hospital (GH) spoilers tease that Michael Corinthos (Chad Duell) may be poised for more heartbreak. He’s just getting to know Sasha Gilmore (Sofia Mattsson) right now, but love could easily bloom. They made quite an impression on each other, so they may decide to see where this leads.

Sasha must know this is awfully risky. Nina Reeves (Michelle Stafford) is doing her best to push Sasha and Michael together, but that’s mainly so her “daughter” will stay in town permanently. Of course, that’s the last thing Sasha should be doing. The longer Sasha hangs around, the more chances there’ll be for Nina to uncover the truth.

Sasha may tell herself she’s going to bolt right after the wedding, but will Michael’s pull convince her to stay? He can be pretty charming when he wants to be. It’s clear that Michael’s getting desperate for love. GH fans know Michael went on a disastrous date thanks to a matchmaking website, so Sasha has to be looking like a great option right now.

Sasha can actually carry on an intelligent conversation and didn’t have more dates lined up for later. That already puts her ahead of the pack! Michael would probably prefer Willow Tait (Katelyn MacMullen), but she just agreed to move forward as a couple with Harrison Chase (Josh Swickard). It seems Willow won’t be a romantic possibility for Michael anytime soon.

We can’t help but notice Michael’s pattern of falling for women with huge secrets. Michael was hoping to fall for an honest, normal woman after all the chaos he endured with Nelle Benson (Chloe Lanier). Unfortunately, he could fall for another con artist. Sasha isn’t Nina’s daughter like she claims to be, so that could turn out to be a deal-breaker when Michael finds out.

Michael isn’t all that close to Nina, but he hates to see anyone get hurt. As a bonus, General Hospital could tie the big reveal in with Michael’s story. He could gripe about how deceiving someone about a child is the worst possible lie. If Brad Cooper (Parry Shen) is in earshot when this potentially happens, that’d be even better!

There’s even a chance Michael himself will uncover Sasha’s deception. It looks like Valentin has the Maxie Jones (Kirsten Storms) and Peter August (Wes Ramsey) situation under control, so there’ll have to be another path to the truth. Sasha’s decision to let Michael in her heart might be her downfall. It could lead to a mistake that rocks Nina to the core and brings serious backlash for Sasha.

This would mean another round of heartache for Michael, too. Will he ever find a woman who’s sane and not hiding something massive? General Hospital spoilers say Michael will just have to keep trying! We’ll give you updates as other GH news comes in. Stay tuned to the ABC soap and don’t forget to check CDL often for the latest General Hospital spoilers, updates and news.