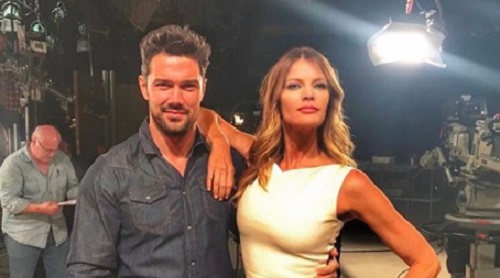 General Hospital (GH) spoilers reveal that one soap star had some birthday wishes for her former TV brother. Michelle Stafford currently plays Phyllis Summers on The Young and the Restless, a role she returned to earlier this year. However, GH fans certainly remember Stafford for her role as Nina Reeves, which Cynthia Watros took over upon Stafford’s departure.

Since Ryan Paevey (ex-Nathan West) celebrated a birthday recently, Stafford couldn’t let his big day go by without acknowledging him. General Hospital viewers will recall that Nathan was Nina’s cousin, but they were raised as siblings. Nina affectionately referred to her little bro as “J,” and he’ll always have a special place in her heart.

On Twitter, Stafford send out a tweet to celebrate. She said, “Happy Birthday!!! @RyanPaevey You will always be my baby brother” and added a heart emoji. Stafford also posted a great pic with Paevey, which makes us miss their former characters’ sweet relationship. It was crushing when Nathan was killed off, especially since it left Nina and Maxie Jones (Kirsten Storms) stuck in so much grief.

James West is also growing up without his dad, so that’s tough. Now Maxie’s poised for more heartbreak thanks to Peter August (Wes Ramsey), which makes it even more devastating that a good guy like Nathan’s gone!

Of course, there’s always a chance Paevey could return to General Hospital one day. Never say never! Any soap death can be fixed with the right crazy twist. As for Stafford, she seems content at Y&R and Watros is going a great job as her GH replacement.

Still, it was nice to see this fun General Hospital reunion in a tweet. Paevey definitely seemed to appreciate Stafford’s birthday message. He tweeted back, “Awww thanks! Miss ya.” Tamara Braun (Kim Nero) and Molly Burnett, who’s served as a temporary Maxie recast in the past, also chimed in with some birthday love. It’s great to see that the GH family is a family for life!

Happy Birthday!!! @RyanPaevey You will always be my baby brother ❤️ pic.twitter.com/8HqOTSI9fF