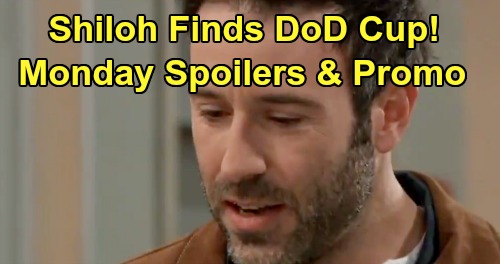 General Hospital (GH) spoilers for Monday, April 15, tease that Franco Baldwin (Roger Howarth) will grill Cameron Webber (William Lipton) about a scuffle at his school. He’ll see that Cam got a little roughed up in this brawl, so he’ll push the teen to spill what happened. Cameron will admit that another guy called Aiden Webber (Jason David) a homophobic slur, so he felt the need to defend him.

Afterward, Franco and Elizabeth Baldwin (Rebecca Herbst) will explain their suspicions to Aiden. They’ll confess to thinking Aiden might identify as gay one day, which will leave Cameron surprised. His next reaction will rub Franco the wrong way, so GH fans can expect more tension between them.

Over with Spencer Cassadine (Nicolas Bechtel), he’ll have a chat with Nina Reeves (Michelle Stafford). Spencer will insist that Nina’s knight in shining armor is blackmailing him. He’ll hope Nina can get Valentin Cassadine (James Patrick Stuart) off his back, but this plan won’t work out as well as he hoped.

Other General Hospital spoilers say Valentin will request help from Nora Buchanan (Hillary B. Smith). She thought her business in Port Charles was all wrapped up, but Valentin will insist that he needs her services again. He’ll have a strategy in mind that only someone as skilled as Nora can pull off.

Meanwhile, Willow Tait (Katelyn MacMullen) will get in touch with someone over the phone. She’ll contend that she has to see this person immediately, and there’s a good chance it’s Michael Corinthos (Chad Duell).

It looks like they’ll meet back up to discuss the loyalty pledge that Shiloh Archer (Coby Ryan McLaughlin) requires. All new members of “The Trust” must record a confession and sign a transcript before the initiation ceremony.

This will lead to Willow dropping some hints of her own, so Michael will start putting the clues together. He could realize whatever Willow used as her own trust offering or this could be about giving up Shiloh’s child for adoption. Either way, Michael will figure out something stunning and offer sympathy soon.

Elsewhere, Sam McCall (Kelly Monaco) will insist she thinks something’s wrong. It appears she’ll be manipulating Shiloh again by pretending she has no idea where Kristina Corinthos-Davis (Lexi Ainsworth) is. Sam tried pulling the “Kristina is always flaky” excuse, but that can only work for so long. She’ll have to try another tactic, but she’ll assure Shiloh that she’s committed to helping him find Krissy.

At GH, Michael will speak with Jason Morgan (Steve Burton) and Carly Corinthos (Laura Wright). They’ll be concerned about the threat Shiloh still poses and what that loyalty pledge might’ve entailed for Kristina. Sonny Corinthos (Maurice Benard) is a man of many secrets, so they’ll assume Kristina’s trust offering involved her father instead of Alexis Davis (Nancy Lee Grahn).

Nevertheless, Jason will promise he’s working an angle to take Shiloh down. That angle is the drugged cup, which Jason will hand off to trustworthy Liz. Alas, Brad Cooper (Parry Shen) will wind up with this significant proof. He’ll be handling things at the lab, but Shiloh’s got a stroke of luck headed his way. General Hospital spoilers say he’ll spot Brad with the cup and question how he got it.

Brad will do his best to keep it vague, but Shiloh will ultimately assume Jason is mixed up in this. He’ll also hope to make the test on the cup either work to his advantage or never happen at all.

Some great drama’s brewing, so we’ll give you updates as other GH news comes in. Stay tuned to the ABC soap and don’t forget to check CDL often for the latest General Hospital spoilers, updates and news.