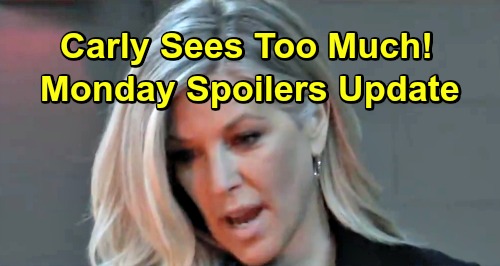 Over with Carly Corinthos (Laura Wright), she’ll grill Ryan about the license box she spotted. Of course, Carly’s messing with a very dangerous man here. General Hospital spoilers say Ryan will eventually gain the upper hand. He’ll force Carly into the trunk and kick off a shocking kidnapping plot.

Before Ryan leaves with Ava, he’ll have one more crisis to handle. Felicia Scorpio (Kristina Wagner) will ask questions about the victim number discrepancy, but “Kevin” certainly won’t offer the truth. He’ll shoo Felicia away as fast as possible, so she’ll end up mulling over his bizarre behavior with Mac Scorpio (John J. York).

It won’t be long until Mac and Felicia realize Ryan is alive, especially since Curtis Ashford (Donnell Turner) will help crack the case. Curtis will talk to Harrison Chase (Josh Swickard) about the contact marked as “URGENT” in Jordan Ashford’s (Briana Nicole Henry) cell phone.

Chase won’t know what that’s about or who Jordan might’ve been in touch with. However, it’ll all become clear once Curtis listens to Franco Baldwin’s (Roger Howarth) voicemail. He exposed Ryan as he killer in that message, so Curtis and Chase will get the picture.

Elizabeth Webber (Rebecca Herbst) thought Franco was delirious when he told her Ryan was the killer, but the real story is just that crazy. The wheels are already turning for Chase, so he should be convinced Ryan’s alive soon.

At Ferncliff, Laura Webber (Genie Francis) will guide Dr. Kevin Collins (Jon Lindstrom) down a secret passageway. They’ll hit some stumbling blocks as they work to get out.

Laura will eventually have to leave blind Kevin behind so she can pick up the pace. She’ll vow to return for Kevin as quick as she can. In Turkey, GH spoilers state that Sonny Corinthos (Maurice Benard) will walk into a risky situation. He’ll join a group of poker-playing thugs, but the encounter will ultimately lead to a physical fight.

General Hospital spoilers say Sonny will be fine with throwing a few punches. If it means getting info on Dante Falconeri’s (Dominic Zamprogna) whereabouts, Sonny will do just about anything. Back in Port Charles, Anna Devane (Finola Hughes) and Dr. Hamilton Finn (Michael Easton) will discuss her memories. Finn will determine that if Anna wants the facts, she’ll need Alex Devane Marick’s (Finola Hughes) help.

It looks like another hot episode’s in store. We’ll give you updates as other GH details emerge. Stay tuned to the ABC soap and don’t forget to check CDL often for the latest General Hospital spoilers, updates and news.