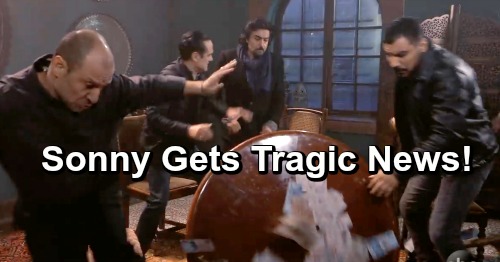 General Hospital spoilers tease that Sonny Corinthos (Maurice Benard) will find himself in some seriously dangerous situations on new GH episodes this week, March 4-8. Sonny will wind up retreating from a deadly encounter and taking a step back to rethink his strategy.

Sonny has taken it upon himself to travel to Turkey and find his missing son Dante Falconeri (Dominic Zamprogna). Dante has been in deep cover for several months, trying to help the WSB capture criminal Raj Patel (Noshir Dalal) who had tried to kill Lulu Falconeri (Emme Rylan) in the past.

Of course, he’s looking for Dante to bring him back after Ryan Chamberlain (Jon Lindstrom) tried to kill his wife!

For one thing, Sonny gets into a what appears to be a meeting of a bunch of pretty serious looking thugs and turns the table on them literally, with money flying everywhere – when he apparently hears something he doesn’t want to hear. Could it be about Dante? Or maybe he’s walked in on a drug deal.

Other General Hospital spoilers tease Dante is being held captive and one of the goons in the room gave Sonny some grief and a tall tale – like saying Dante was already dead (which we know isn’t the case). That would send Sonny into a rage, especially if he realized they were playing mind games over his only living son.

General Hospital spoilers reveal that Sonny also receives an ominous message this week – perhaps the message will be delivered in person, with threats to stay out of where he doesn’t belong! Sonny’s not one to back away from a threat, but in Turkey thugs may come after someone with swords instead of guns, and swords aren’t exactly in Sonny’s repertoire.

GH buzz is that Raj is into some more serious criminal activity in Turkey so Sonny had better be expecting the worst. Stay tuned to GH and keep viewing CDL General Hospital spoilers for the latest news and developments as Sonny searches for Dante!