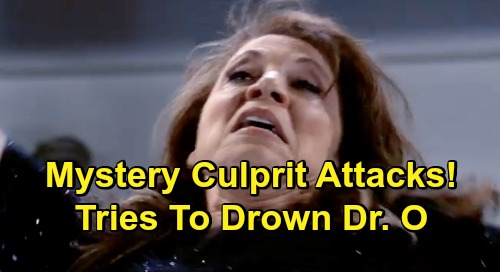 General Hospital (GH) spoilers tease that Liesl Obrecht (Kathleen Gati) will make a drunken appearance at the wedding reception of Franco Baldwin (Roger Howarth) and Elizabeth Baldwin (Rebecca Herbst). She’ll take a swim in the harbor by the end of the night! Who will push Liesl overboard and why? Let’s look at Liesl’s current situation and see what that can tell us about the culprit.

Liesl happens to be keeping some major secrets about a few Port Charles residents, and someone may decide they need to keep her quiet. GH fans know Sasha Gilmore (Sofia Mattsson) isn’t Nina Reeves’ (Cynthia Watros) biological daughter. Since Liesl knows this as well, that could pose a threat to her safety.

Valentin Cassadine (James Patrick Stuart) might decide to shut Liesl up once and for all. Sasha also wants to stay in Port Charles to be close to Michael Corinthos (Chad Duell) and is afraid her secret might come out. Could Sasha find out Liesl knows the truth and take drastic action to prevent Liesl’s blabbing?

Brad Cooper (Parry Shen) has been at odds with Liesl for years now, so he could be another contender. Will drunk Liesl ramble about delivering Nelle Benson’s (Chloe Lanier) baby in the woods? Will Brad overhear and realize he has to act fast?

Brad knows if the truth is exposed, he’ll lose “Wiley Cooper-Jones” (Theo and Erik Olson) and Lucas Jones (Ryan Carnes). He’s also aware that Sonny Corinthos (Maurice Benard) could make him a deadly target for keeping Michael Corinthos (Chad Duell) baby from him. Brad’s got some great reasons to shove Liesl into the water below.

Nelle doesn’t want Michael to know that Brad has their child either. She’s determined to keep her secret, and she knows Liesl could easily spill the beans about delivering her son. Could Nelle make a jailbreak and throw Liesl overboard?

Shiloh believes Wiley is his child and knows Willow Tait (Katelyn MacMullen) believes the baby is hers, too. The cult leader has also killed before to get what he wants. Will Shiloh overhear Liesl’s drunken revelations and decide she needs to be eliminated? Could it be part of a plan to have Willow and “Wiley” back in his life?

Shiloh probably wouldn’t even have to find someone take the fall for him. Since Liesl will be drunk, it would look like an accident anyway. Somebody will decide Liesl needs to take a dip in the harbor regardless of the reason, so big drama’s brewing!