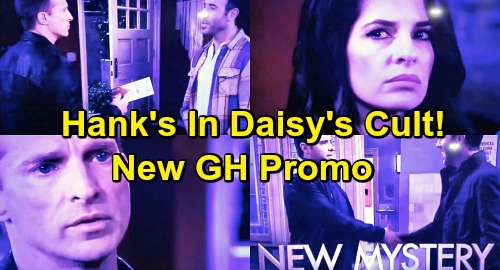 General Hospital (GH) spoilers reveal that the mystery surrounding “Hank” (Coby Ryan McLaughlin) is unraveling. Let’s consider Hank’s background and what this is building to. He claims he knew Drew Cain (Billy Miller) back when Drew was a Navy SEAL. Hank told Jason Morgan (Steve Burton) that they spent some time together in Afghanistan, which may or may not be true.

Jason has suspicions about Hank and his instincts are always spot-on. We should definitely trust Jason on this, especially since Hank clearly lied about his pool-playing skills. Hank has many more secrets left to uncover, including his other connections in Port Charles.

General Hospital spoilers say Hank has ties to at least a couple other people in town. Thanks to a new promo for the week of January 2-4, we may have a hint about which ones. A clip shows Jason receiving a book from Hank, which looks a lot like the one Daisy (Kelsey Wang) gave Kristina Corinthos-Davis (Lexi Ainsworth).

GH fans will recall that this was a self-help book called Every Day Is a New Dawn. Daisy swears by it and Kristina’s already bought the hype.

She’s falling right into this cult, so that could explain another one of Hank’s connections. Since Oscar Nero (Garren Stitt) has been living with this group, he could be an additional link to Hank.

Is Hank one of the people in charge here? Even if he’s not the actual cult leader, Hank may be his or her right-hand man. Now let’s think about how another storyline will cross over. Jason will help Sam McCall investigate for Kristina’s sake.

They’ll try to figure out how all this fits in with Drew’s past. What they may not realize is that Hank is likely tied to the mysterious email story, too.

Remember that obituary Sam received from the Galena newspaper? Sam and Curtis Ashford (Donnell Turner) tracked down the only person in Port Charles with a subscription. It was Yvonne Godfrey (Janet Hubert), but her mental state made it difficult for Curtis and Sam to get answers.

Fortunately, General Hospital provided a clue after they left. A nervous Daisy was spotted picking up that newspaper, which suggests the cult may be tied to the messages Sam’s getting. Since it seems Hank is tied to the cult as well, this is one giant, messy plot!