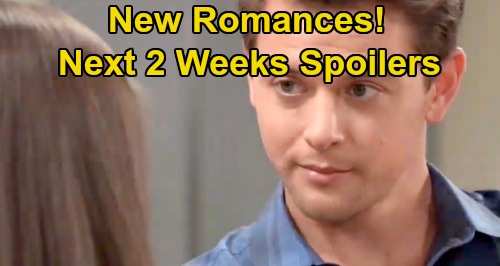 General Hospital (GH) spoilers for the next two weeks tease that some gripping moments are on the way. During the week of September 9-13, Elizabeth Baldwin (Rebecca Herbst) will hope for good news. She’ll visit Andre Maddox (Anthony Montgomery) at GH and ask if he can help Franco Baldwin (Roger Howarth). Liz will be desperate to get her husband back, so Andre will work hard to make it happen.

In the meantime, Kim Nero (Tamara Braun) will be unable to avoid temptation. It sounds like we’ll see another encounter between Franco and Kim. Will they lock lips once again? Kim can’t help but feel drawn to Franco thanks to his Drew Cain (Billy Miller) memories. She’ll struggle to stay loyal to Julian Jerome (William deVry) as well as her good friend, Liz.

Julian will have enough on his plate thanks to Brad Cooper’s (Parry Shen) truth flood. He’ll be spilling all kinds of horrible details – like the fact that “Wiley Cooper-Jones” is actually Jonah Corinthos. Julian will be pressured to kill Liesl Obrecht (Kathleen Gati) after Brad reveals she knows the big secret.

While Julian mulls over that decision, Laura Webber (Genie Francis) will get updates from Curtis Ashford (Donnell Turner). They’ll discuss the codicil mission and how it relates to Spencer Cassadine’s (Nicholas Bechtel) rightful inheritance. Of course, this hot storyline is likely just a setup for Nikolas Cassadine’s (Tyler Christopher) return.

During the week of September 16-20, Curtis and Laura will keep secrets. They’ll want to keep their clandestine meetings under wraps, so they may have to tell a fib or two. Over with Willow Tait (Katelyn MacMullen), she’ll grow concerned about Michael Corinthos (Chad Duell). Willow will run into Michael and realize he’s upset, so she’ll do whatever she can to help.

It looks like Michael and Willow’s bond will get even stronger. Whether this is about revived Jonah grief or perhaps Sasha Gilmore’s (Sofia Mattsson) secrets, Willow will provide comfort. Next, Shiloh Archer (Coby Ryan McLaughlin) will make an important phone call. Perhaps that’ll be to Peter August (Wes Ramsey), who’s been blackmailed into helping Shiloh. He may want to make sure everything’s squared away.

General Hospital spoilers say Peter will indeed want to end this nightmare. He may give Shiloh the assistance he needs at first, but will he double-cross Shiloh later? That’s certainly an option as this hot plot moves forward. Regardless, Shiloh will take the stand to testify in his own defense. He’ll feel confident he won’t do any jail time thanks to Peter’s efforts.

Jason Morgan (Steve Burton) will remain on edge over Shiloh and how he might wiggle out of trouble. He’ll worry about Shiloh walking free and causing serious issues. Finally, Lulu Spencer (Emme Rylan) will find herself feeling nervous. She likes Dustin Phillips (Mark Lawson), but it looks like his flirting may leave her flustered.