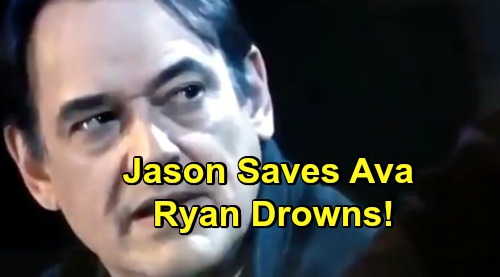 General Hospital (GH) spoilers tease that Ava Jerome (Maura West) will land in more danger than ever. Her trip to Niagara Falls certainly won’t turn out like she planned. Ava expected to elope with the man of her dreams, but she’ll soon find herself living a nightmare. The “Dr. Kevin Collins” Ava has come to know and rely on is actually his evil twin, Ryan Chamberlain (Jon Lindstrom).

Jason Morgan (Steve Burton) and Laura Webber (Genie Francis) will do whatever they can to save Ava and kidnapped Carly Corinthos (Laura Wright). Unfortunately, it’ll be too late to stop Ryan’s last sinister move. General Hospital spoilers say Ryan will discover he’s trapped with no way out. He’ll be backed into a corner once Laura and Jason expose his identity to Ava.

In the beginning, Ryan posed as Kevin just to gain his freedom and have a little fun. However, this eventually became a twisted love story. Now everything Ryan does is about keeping Ava by his side. When he realizes he’s not going to have the life he wanted with Ava, Ryan will kiss her goodbye and throw her off a bridge.

GH’s latest promo reveals the bombshell, which could lead to Ryan going in the water along with her. He may feel like he’d rather die with his love than get taken into custody. Ryan wouldn’t be on board with another Ferncliff stint or a stay in a higher security facility. Since Jason will be armed right there in front of him, perhaps Ryan will just opt for control of his own deadly fate.

Ava and Ryan could both find themselves flailing around in the water below the bridge. Jason is always the hero, so he may rush down and pull Ava out. Of course, he wouldn’t be in any hurry to rescue Ryan! Jason couldn’t even trust Ryan not to drag him down and murder him.

Will Jason, Ava and Laura all watch as Ryan drowns? Will they just let the menace to society die and finally rid everyone of the threat? Regardless, General Hospital spoilers say Ava will have a lot to process after this. Once the shock wears off, rage should set in. Ava will inevitably face pain and guilt as well. She’ll feel responsible for getting too close to Ryan since he killed Kiki Jerome (Hayley Erin).

General Hospital fans won’t want to miss Ava’s next chapter, which could prove just as dark as this one if she isn’t careful. We’ll give you updates as other GH news comes in. Stick with the ABC soap and don’t forget to check CDL often for the latest General Hospital spoilers, updates and news.

Now we’re getting to the REALLY fun stuff. All good things must end…or do they? @GeneralHospital #gh #gh55 #thetwinning #kevinryan #generalhospital https://t.co/i2AOvEDm8B