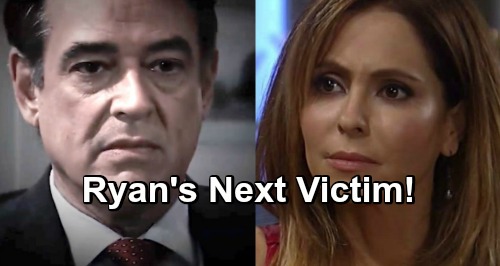 General Hospital (GH) spoilers tease that Ryan Chamberlain (Jon Lindstrom) will strike again by the end of the week ending January 18. It looks like he’ll plan to take out Carly Corinthos (Laura Wright), but she’ll end up being bumped down his hit list. The same goes for Sonny Corinthos (Maurice Benard). They’ll be busy dealing with Mike Corbin’s (Max Gail) latest Alzheimer’s episode, so Ryan may not have the chance.

However, Lucy Coe (Lynn Herring) has a book event coming up and GH won’t pass up a shot at gruesome drama. This will be the perfect place to show off another round of Ryan’s grisly handiwork. Of course, we have to consider who Ryan’s victim will be. Whether he actually succeeds in killing this person or not, it seems likely that he or she will simply be in the wrong place at the wrong time.

There are certainly signs that point to danger for Lulu Falconeri (Emme Rylan). However, she’s just now digging into the Ryan Chamberlain (Jon Lindstrom) details, so General Hospital might let all this rev up a bit more. In fact, Lulu could soon have a good reason to fight harder for answers.

Let’s mull over a few clues as we work to nail down the next victim. For starters, there was that odd scene between Sonny and Lulu not too long ago. He paid Lulu a visit to chat about adding extra security as well as the Dante Falconeri (Dominic Zamprogna) situation. It’s not like Lulu and Sonny interact much, so what was that about? Maybe GH wanted to convey a crucial piece of information.

During this discussion, Lulu mentioned that Dante was going deeper undercover. She suggested that they may not be in touch for a while, which could be important. What if Olivia Quartermaine (Lisa LoCicero) lands in Ryan’s cruel path? General Hospital would have an easy explanation for why Dante isn’t around for Olivia’s potential funeral. He can’t go if he doesn’t know and can’t be reached!

Even if Olivia just sustains massive injuries and winds up at GH, that’s something Dante would be there for it he knew and could come home. The deeper undercover explanation is a simple fix.

Plus, we should think about Olivia and Ned Quartermaine’s (Wally Kurth) conversations before and after the election. She was worried about Ned becoming a victim, but maybe she’s the one who’ll face grave danger.

Olivia and Ned didn’t let his loss get them down. They chose to view it as a blessing in a way. Now they’ll get to spend so more much time together – or will they? That could’ve been another anvil about Olivia and Ned’s happiness being cut short.

Some General Hospital spoilers for next week back up the deadly danger for Olivia idea. Laura Collins (Genie Francis) will console Charlotte Cassadine (Scarlett Fernandez), who loves Olivia as an extra grandma and has bonded with her in the past. We’ve also got some worries for Sonny and heartbreak for Carly coming up. That could all fit with Olivia.

Later, Sonny will feel like he needs to pay his respects. That could involve a trip to Morgan Corinthos’ (Bryan Craig) grave, which we know Sonny will take soon. However, Olivia’s death or near death could certainly be the reason why.

Sonny may feel like too many people he cares about are departing this earth. If Olivia indeed bites the dust, Sonny would surely pay his respects to Ned, too.

There had been some buzz about Olivia possibly being the next murder victim before Peyton Mills (John Patrick Jordan) was killed. Perhaps that buzz came just a bit too soon. Now that the facts are lining up, Olivia could be a goner – or at least an almost murder victim!