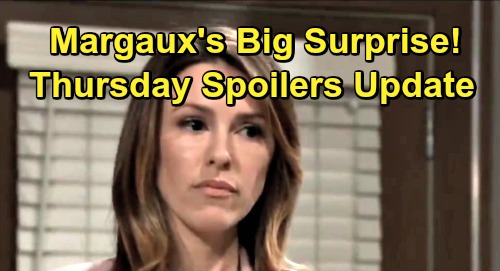 General Hospital (GH) spoilers update for Thursday, June 6, tease that Shiloh Archer (Coby Ryan McLaughlin) will get a visit from Margaux Dawson (Elizabeth Hendrickson). He’ll trust that she found a way to vindicate him, but he may be in for a rude awakening. Margaux may reveal that since Shiloh is no longer in control of her pledge, he’s no longer in control of her either.

Of course, Shiloh will try to manipulate Margaux into seeing things his way. Sonny Corinthos (Maurice Benard) took a huge risk by giving Margaux her pledge back. She could always change her mind and side with Shiloh, but it doesn’t look like she will on Thursday. General Hospital spoilers say Margaux will stand her ground, which could mean Shiloh’s charges will stick for the time being.

However, positive updates are headed Shiloh’s way soon enough. That could involve some legal loopholes or maybe he’ll get a step closer to meeting his child. Harmony Miller (Inga Cadranel) will seem pleased by something Willow Tait (Katelyn MacMullen) spills. It looks like the pressure will rise and lead Willow to blurt out too much.

Harmony will be grateful to Willow for providing the confirmation she needs. She’ll feel like she’s got some info that’ll earn her points with Shiloh. Over with Julian Jerome (William deVry), he’ll tell Alexis Davis (Nancy Lee Grahn) about the plot he carried out with Sam McCall (Kelly Monaco). Julian will contend that they hopefully made it so Shiloh can never prove he had a child.

General Hospital spoilers say Julian will talk to Willow soon and give her a heads-up on what they’ve done. Unfortunately, Harmony could present a problem. She just might be a snag in Julian’s plan to keep Shiloh out of the picture.

Meanwhile, Carly Corinthos (Laura Wright) won’t be afraid of Ava Jerome (Maura Wright). She’ll let Sonny Corinthos (Maurice Benard) know that she has no intention of running away from a fight. GH fans can expect a truce for Carly on Thursday. It’s possible Carly and Ava will agree to peace for a little while – for the baby’s sake we’d assume.

Then again, Carly might reach a peaceful agreement with someone else. Truce or no truce, it’s tough to believe Ava and Carly will ever really stop their bickering. At GH, Jordan Ashford (Briana Nicole Henry) will have questions about Ryan Chamberlain (Jon Lindstrom). She may be skeptical about the serial killer’s change of heart, which could prompt her private chat with Stella Henry (Vernee Watson).

Jordan might interrogate Stella to find out what’s really going on. Did Dr. Kevin Collins (Jon Lindstrom) swap place with Ryan long enough to sign over his kidney? It’s certainly possible, but Stella may not want to spill that if she knows. Jordan might back out of the transplant to protect those involved from legal trouble, so it’s best to keep her in the dark.

In the waiting area, Franco Baldwin (Roger Howarth) will be concerned about Ryan’s complications. Franco will fret about Ryan getting stuck in the OR too long and delaying Jordan’s portion of the transplant.

Dr. Hamilton Finn, Kevin and Laura Webber (Genie Francis) will be there to hear Franco’s worries and offer their perspectives. They’ll all cross their fingers and hope it all works out.