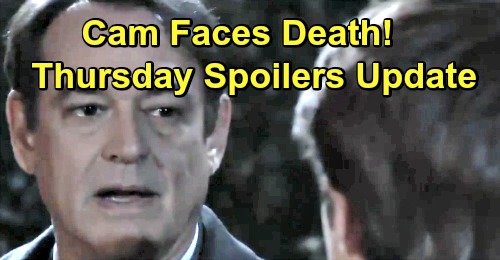 General Hospital (GH) spoilers for Thursday, March 7, tease that Josslyn Jacks (Eden McCoy) will be filled with fear. Oscar Nero (Garren Stitt) had a terrible seizure in their room at the inn, so he was rushed to a nearby hospital in Niagara Falls. Joss knows Oscar’s dying, but she’ll pray this isn’t the end of the road. She’ll plead with a nurse to let her see Oscar and hope for the best.

Back in Port Charles, Drew Cain (Billy Miller) will hear about Oscar’s ordeal. Dr. Kim Nero (Tamara Braun) will explain the situation to Drew, so it won’t be long until they’re joining Joss at the hospital. They’ll be in the same boat as they worry about Oscar leaving too soon. All three of them want more time to bid him farewell and make a few extra memories.

The good news is Oscar isn’t dying just yet. The bad news is he may not have the same quality of life after this. Oscar could head downhill rapidly, so that’s something his family will have to prepare for. Meanwhile, Cameron Webber (William Lipton) could be a bit confused. He just ran into “Dr. Kevin Collins” aka Ryan Chamberlain (Jon Lindstrom), but Ryan won’t let the teen dash off like he wants to.

Ryan will keep Cameron chatting for a moment as he looks at him with evil eyes. Thankfully, Cam won’t end up dead after this interaction. Will Trina (Sydney Mikayla) avoid a grim fate as well? It’s tough to say when Ryan’s around! Everyone’s fair game when his dark secret’s at stake.

Over by the car, Ava Jerome (Maura West) will approach the trunk and open it to reveal Carly Corinthos (Laura Wright). She’ll be deeply disturbed to see Carly bound, gagged and bloody from that gash on her head. Carly will be frozen for a moment as she takes in the scene. She won’t understand how this could’ve happened, but Jason Morgan (Steve Burton) and Laura Webber (Genie Francis) are on their way with answers.

Laura will mull over the situation with Jason as he drives them to Niagara Falls. She’ll realize something about Ryan’s agenda and panic all over again. Ava may not be Laura’s favorite person, but she’ll understand how dire the circumstances are. She certainly won’t want Ava to get hurt or killed.

Jason and Laura will worry about Carly, too. They’ll just hope they can make it before Ryan claims another victim. At GH, Lulu Falconeri (Emme Rylan) will be surprised when she overhears Harrison Chase’s (Josh Swickard) orders. She’ll realize he’s warning the PCPD about their suspect, who’s considered armed and dangerous.

Lulu will be hit with a memory burst when Chase drops the Ryan bomb. She’ll recall her horrifying encounter with the real murderer and most likely fret over Laura’s latest adventure. Elsewhere, Elizabeth Baldwin (Rebecca Herbst) will call someone with updates on Franco Baldwin (Roger Howarth). She’ll pass along info about Franco’s injuries and his plan with Jordan Ashford (Briana Nicole Henry).

Perhaps it’ll be Scott Baldwin (Kin Shriner) who finds out the startling truth. If so, he should be relieved to hear Franco’s innocent like he thought. Cameron could also pick up his phone or at least get a voicemail. He’s sure to be in big trouble over his Niagara Falls trip, but Oscar’s health will remain his main concern.

Other General Hospital spoilers say Sonny Corinthos (Maurice Benard) will search for more Dante Falconeri (Dominic Zamprogna) clues. He’ll talk to someone who offers details on a crucial conversation. Sonny will also receive a mysterious message that leaves him on edge. He’ll know he needs to get to Dante before it’s too late!