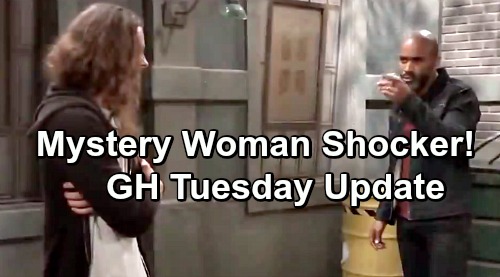 General Hospital (GH) spoilers update for Tuesday, April 30, tease that Stella Henry (Vernee Watson) will make a shocking discovery. She’ll cry out when she realizes Jordan Ashford (Briana Nicole Henry) is out cold on the floor. Stella will call for a GH staff member to come help, so it won’t be long until Jordan’s getting the medical treatment she needs.

However, what Jordan needs most is a kidney and that’s not available right now. She’ll just have to hang in there and hope she gets her match soon.

Meanwhile, Curtis Ashford (Donnell Turner) will keep grilling Timmy about the pharmacy break-in. A woman approached him about carrying out her plan, but who was it? That’s what Curtis will try to figure out with Timmy’s assistance on Tuesday.

Other General Hospital spoilers state that Dr. Hamilton Finn (Michael Easton) will have a question for Elizabeth Baldwin (Rebecca Herbst). He’ll bring up Hayden Barnes’ (Rebecca Budig) name and wonder if Liz has heard from her.

Of course, Liz hasn’t been in touch with Hayden for a while now. Since that probably hasn’t changed, Finn may not score any additional info.

Over with Ava Jerome (Maura West), she’ll interrogate the caller who just reached out. Ava will guess it’s Ryan Chamberlain (Jon Lindstrom), but she can’t be certain unless he says so or the call is traced back to him.

Neither option seems all that likely, but Ava will be convinced that their plot is paying off. She’s undoubtedly right, so Ryan should cause plenty of May sweeps chaos.

Next, Harrison Chase (Josh Swickard) and Valerie Spencer (Paulina Bugembe) will focus on a plot of their own. They’ll conduct an investigation on the down low since Margaux Dawson (Elizabeth Hendrickson) isn’t on board.

Speaking of Sonny, he’ll get some bad news from Dr. Neil Byrne (Joe Flanigan). Sonny and Alexis Davis (Nancy Lee Grahn) will hear about a major Kristina-related complication. Whether Kristina herself is causing drama again or Chase and Valerie are shaking things up, Neil will insist they’ve got an issue to address.

At the Dawn of Day house, Sam McCall (Kelly Monaco) will pretend she’s out of the loop. Shiloh Archer (Coby Ryan McLaughlin) just found her lurking near the DoD records room, so he’s wary of what Sam’s been up to.

Sam will play it cool and act like she’s clueless, but she’s already been in there rummaging. She knows exactly what’s behind that door, but she’ll ask Shiloh what’s inside anyway.

Shiloh will make it clear that Sam should never enter under any circumstances. He may not even offer a reason since DoD is all about trust, which is code for following him blindly.

It sounds like some great scenes are ahead. We’ll give you updates as other GH details emerge. Stick with the ABC soap and don’t forget to check CDL often for the latest General Hospital spoilers, updates and news.