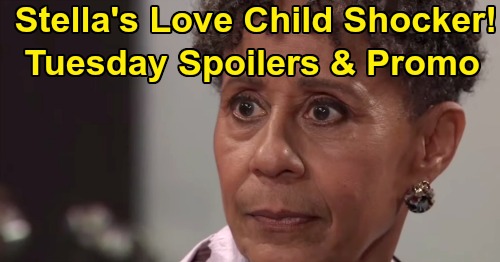 General Hospital (GH) spoilers for Tuesday, July 30, tease that Jordan Ashford (Vinessa Antoine) will sit down for an important conversation with Stella Henry (Vernee Watson). Curtis Ashford (Donnell Turner) will also be on hand to deliver news about Stella’s long-lost relative. It turns out this person is a much-closer relative than they thought.

GH’s weekly promo for July 29-August 2 shows Stella ranting about how she doesn’t have some secret lovechild roaming around. She should know if she gave birth or not! Jordan and Curtis will apparently think Stella had a son or daughter she never came clean about, but Stella will deny the accusations. Will she be telling the truth? Time will tell, but Curtis and Jordan will have a lot to mull over.

General Hospital spoilers say Liesl will eavesdrop on this little chat, so she’ll definitely listen up and try to figure out what’s coming. She might even interrupt at some point and remind them that she’s not to be messed with. Liesl has the power to blow up Sasha and Valentin’s worlds, so they’d better be careful!

Elsewhere, Drew Cain (Billy Miller) will fill Kim Nero (Tamara Braun) in on Oscar Nero Quartermaine’s (Garren Stitt) sweet gesture. He made sure Drew got his medals from his time in the Navy SEALs, so Kim should be touched and proud of their boy. Drew will note that Oscar’s last gift to him was a piece of his past. He may think he owes it to Oscar to dig around and learn a bit more.

Other General Hospital spoilers say Jason Morgan (Steve Burton) will have a fierce warning for Shiloh Archer (Coby Ryan Laughlin). He’ll be fed up with Shiloh’s constant troublemaking, so he’ll try to scare him off. Jason will insist that Shiloh shouldn’t approach his family again, but it’s doubtful Shiloh will stay away. He’s never listened to Jason before, so he’ll probably see no reason to start now.

Finally, Ryan Chamberlain (Jon Lindstrom) will gush about how much he loves Ava Jerome (Maura West), who just showed up to visit him at Pentonville. The serial killer will be convinced Ava still loves him as well, but that’s not the case. Ryan will eventually push Ava to reveal the real reason for her visit. He’ll suggest Ava obviously needs something from him, so he’ll wonder how he can help.

Unfortunately, Ava needs something Ryan can’t give. She needs Ryan to feel genuine remorse as part of her plan to secure Kiki Jerome’s (Hayley Erin) forgiveness, but Ryan just isn’t capable of being sorry. General Hospital spoilers hint that Ava will have to try some new tactics if she wants to make things right with her daughter.

Finally, Lulu Falconeri (Emme Rylan) will take a day to reflect and start moving toward a new normal. As painful as it was to receive divorce papers from Dante Falconeri (Dominic Zamprogna), maybe now Lulu can concentrate on closure. She has to heal her heart and figure out some way forward, so this should be a new beginning for her character.

It sounds like some great drama’s ahead in Port Charles. We’ll give you updates as other GH details emerge. Stay tuned to the ABC soap and don’t forget to check CDL often for the latest General Hospital spoilers, updates and news.