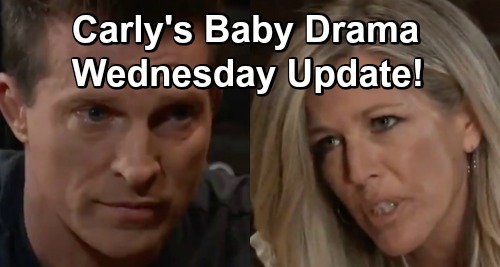 Thankfully, something will indeed change soon enough. GH buzz suggests Jordan may get dying Ryan Chamberlain’s (Jon Lindstrom) kidney eventually, but the serial killer has to be found first! Curtis Ashford (Donnell Turner) will be optimistic when “she’s” ready to talk. He may mean that woman he cornered with Laura Webber (Genie Francis) in Canada, who was clearly Ryan’s accomplice.

Of course, it’s not wise to cross Ryan or mess up his plans. General Hospital spoilers say Laura will find something that leaves her deeply disturbed. She’ll scream in terror, so it could be the accomplice’s bloody corpse. Ryan might kill his forced partner in crime before finally making the trip back to Port Charles.

Over with Shiloh Archer (Coby Ryan McLaughlin), he’ll push Sam McCall (Kelly Monaco) to continue her initiation. Shiloh will think they should do it tonight, but Sam will suggest going to the Nurses Ball together instead. Once Shiloh agrees, that’ll give Jason Morgan (Steve Burton) and Damian Spinelli (Bradford Anderson) a chance to set the cult leader’s trap.

Carly Corinthos (Laura Wright) will have a bad feeling about all this. She’ll be nervous about how far Sam’s willing to go, but Jason may resolve to stop anything crazy. Carly will also take a trip to GH for some baby-related issues. Whether it’s an emergency or not, Jason will drive Carly there and make sure she gets the proper care.

Other General Hospital spoilers say Anna Devane (Finola Hughes) will badmouth marriage. She’ll tell Robert Scorpio (Tristan Rogers) she’s sworn off it for good, but she’ll just be trying to discourage his proposal. Anna only caught the end of that Metro Court chat, so she assumes Robert is the one who wants to tie the knot.

By the time Anna’s through, Robert may think Finn’s going to crash and burn. However, Anna might change her tune if it was a legitimate proposal from the man she wants a future with. Finn should really give it a shot and see what happens.

Finally, Mike Corbin (Max Gail) will surprise his girlfriend with Finn’s engagement ring. He’ll get down on one knee and ask Yvonne Godfrey (Janet Hubert) to marry him. General Hospital spoilers say the ring chaos will keep spreading, so don’t miss all the action on Wednesday.

It sounds like some fantastic scenes are on the way. We’ll give you updates as other GH news comes in. Stick with the ABC soap and don’t forget to check CDL often for the latest General Hospital spoilers, updates and news.