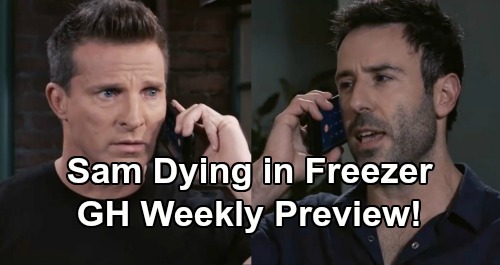 General Hospital (GH) spoilers preview video teases that we’re in for an exciting and action-packed week. The new GH promo for the week of August 5 is titled “Kill Me And Sam Dies” and is all about the predicament that GH viewers saw Sam McCall (Kelly Monaco) face at the end of last week. As viewers will remember, Sam was just exiting Shiloh Archer’s (Coby Ryan McLaughlin) hotel room with the flash drive, when a menacing Shiloh appeared at the door.

Well, it looks like this week will start with Shiloh on the phone with Jason Morgan (Steve Burton), telling him that if he ever wants to see Sam alive again, then he’ll follow instructions. General Hospital spoilers show that Shiloh’s first instruction will be for Jason to meet him at the hotel, and when Jason arrives, a big scene will unfold.

Jason will proceed to bust through the hotel room door and shove Shiloh’s face down against the desk, then he’ll pin Shiloh up against the wall and proceed to choke him. But Shiloh will make an ominous statement as he’s being choked – he’ll tell Jason, “Kill me, Sam Dies!” That will surely stop Jason in his tracks, but it will be difficult, since Jason has wanted Shiloh “eliminated” for some time.

Fortunately for Sam, Jason will manage to control himself and keep from choking Shiloh to death, but the situation is going to start looking bleak for Jason as Shiloh ultimately explains his plan. According to GH spoilers, Shiloh will want Jason to cooperate with Dr. Arthur Cabot (Time Winters) and allow the transfer of Drew Cain’s (Billy Miller) memories into his brain.

As GH viewers know, Shiloh is desperate for cash, and he wants to get his hands on the fortune that was left back in Afghanistan. But it seems that only Drew knew where the cash was located, so Shiloh needs to access Drew’s old memories…and he needs a subject to map the memories onto. Shiloh will figure that he can kill two birds with one stone here – simultaneously getting access to Drew’s memories while erasing Jason’s memory of his own life and self.

But there’s a wrinkle to this story that Shiloh won’t be counting on. Jason suffered brain damage in the past, and that will make him an unsuitable candidate for the memory transfer. That’s going to anger Shiloh, but he’ll plug on ahead with his plan as he locates another person to be the subject who gets Drew’s memories…Franco Baldwin (Roger Howarth).

GH viewers will have to tune in to see how this all goes down and ultimately how Franco gets himself roped into becoming the subject of the memory mapping experiment, but while all of this is going on, Sam’s going to be in grave danger. General Hospital spoilers say that Shiloh will have her locked in a freezer in an undisclosed location.

And that will mean that time is of the essence, since Sam will be running out of oxygen in the freezer. It looks like Jason will have to cooperate in order to get the location where Shiloh’s got Sam locked up. But we should note that, by going to all of these extremes, Shiloh is really setting himself up for a big fall.

After all of this, Jason is going to be determined to eliminate Shiloh permanently, and he’ll almost surely have Sonny Corinthos (Maurice Benard) on his side this time. Remember that previously Sonny balked at having Shiloh eliminated, but now that Shiloh will have nearly killed Sam, look out!

And speaking of Sonny, look for him to get involved in the race to find Sam, since Drew will wind up getting him involved in the matter. As viewers will remember, Drew and Curtis Ashford (Donnell Turner) have recently discovered that the flash drive has been stolen, and they strongly suspect that Shiloh has it. They’ll be on the verge of figuring out what Shiloh’s up to with the drive shortly, and they’ll get Sonny involved when they can’t track down Sam and Jason.

It sounds like we’re in for an exciting week, so stay tuned! We’ll give you updates as GH news comes in. Stick with the ABC soap and don’t forget to check CDL often for the latest General Hospital spoilers, updates, and news.