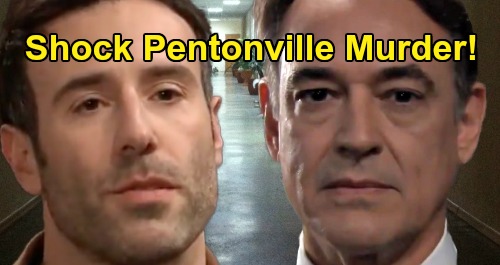 According to General Hospital spoilers, it will turn out that Shiloh’s got Sam stashed in a freezer, where her life will be on the line. She’ll be at risk of running out of oxygen and possibly freezing to death…unless Jason Morgan (Steve Burton) complies with Shiloh’s demands, which involve a memory mapping scheme. Long story short, Shiloh wants Drew’s memories mapped onto Jason so he can access Drew’s memory of where a large stash of cash is hidden.

Look for that story to take some twists and turns before it’s done, with Drew and Curtis Ashford (Donnell Turner) figuring out what’s going on and getting Sonny Corinthos (Maurice Benard) involved. Ultimately, GH spoilers tell us that Drew’s memories will end up being mapped onto Franco Baldwin’s (Roger Howarth) brain, and from there things will get messy.

But given that Shiloh has gone to such extremes, we have to wonder what’s in store for him down the road. After Kristina Corinthos-Davis’ (Lexi Ainsworth) ordeal with Shiloh, Jason was ready to permanently “eliminate” him, but Sonny stepped in and prevented an execution, primarily at Kristina’s request. The men decided to let the legal system handle Shiloh, since he’d been accused of such serious crimes.

But now Shiloh has decided to push the envelope and risk seriously agitating Jason and Sonny once again. Kidnapping Sam and trying to strong-arm Jason into taking on Drew’s memories will surely be the last straw for Sonny. Of course, assuming Sonny finally does decide to have Shiloh “eliminated,” he’ll have to be careful in how and when it happens. He might just decide to wait until Shiloh gets sent off to prison and target him there.

But what if Sonny ultimately doesn’t have to target Shiloh? If Shiloh ends up in Pentonville – which he surely will – he’ll probably encounter someone quite familiar to GH viewers…Ryan Chamberlain (Jon Lindstrom). Ever since Ryan picked up Shiloh’s DOD book from the prison library cart, it’s seemed like they’re destined to someday meet. Perhaps they’ll end up being cell mates!

And if Shiloh does end up sharing a cell with Ryan, that probably won’t be a good scene. Sure, the men could wind up becoming buds, but GH buzz says it’s more likely that Ryan will be dismissively amused with Shiloh. After all, Shiloh has a bit of a God complex, and for Ryan, that will probably be funny, since Ryan has a serious God complex of his own going on. And there probably won’t be room for two Gods in one cell.

Could Ryan ultimately kill Shiloh, perhaps before Sonny ever gets a chance to arrange for an inside hit? You never know, and it would certainly be a big way for Shiloh to go out…to be killed by the most famous serial killer in Port Charles, all because his ego was out of check.

Of course GH viewers will have to tune in to see what actually happens with Shiloh, but a couple of things seem pretty clear at this point – that Shiloh’s going to be in serious danger soon from at least Sonny and Jason, and that his days on the outside are limited.

What do you think is going to happen to Shiloh? Are his days numbered? Stay tuned to the ABC soap and don’t forget to check CDL often for the latest General Hospital spoilers, updates, and news.